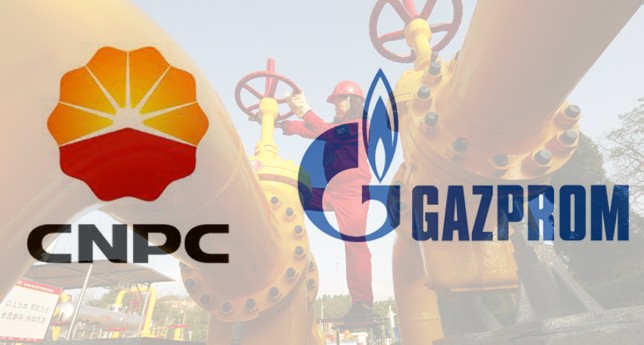 Reuters reports that Russia’s Gazprom and China’s CNPC have come closer on a strategic gas supply deal – one they hope to sign before the end of this year – but remain far apart on price:

Pressure is increasing on Gazprom to venture into the Chinese market as Russian rivals such as Novatek (NVTK.MM) secure deals to supply China from yet-to-build liquefied gas plants and lobby the government to limit Gazprom’s gas export monopoly.

The terms, signed by heads of Gazprom and CNPC in the presence of Presidents Vladimir Putin and Xi Jinping on Thursday “define the volumes, start of deliveries, payments, ‘take-or-pay’ amendment” and other issues, Gazprom said in a statement. It gave no further details.

“Parameters were agreed, so it’s only left to agree on the price. Hope it will happen soon,” Dmitry Peskov, a spokesman for Putin, told a briefing.

Gazprom has been in talks with Beijing for years as it seeks to diversify its customers away from Europe, but China, the world’s top energy user, has proved to be a tough negotiator, demanding a steep discount to prices paid by Western utilities. [Source]

The Moscow News adds that Gazprom chairman Alexei Miller called the agreement, which emerged following talks by Presidents Xi and Putin at the G20 Leaders’ Summit in St. Petersburg, “evidence of the determination of both sides for a successful conclusion to talks.” But CNPC wants the price of gas to be linked to Henry Hub prices in the U.S., which have fallen amid the emergence of America as the world’s largest gas producer, while Gazprom has refused. From The Wall Street Journal:

“The Chinese want to make sure the gas is cheap,” says Thierry Bros, an analyst at Societe Generale. “But Gazprom was never going to recognize Henry Hub as the global benchmark.”

The increased production in the U.S. has already hit Gazprom in Europe, its most lucrative market. Coal pushed out of the U.S. by cheap gas flooded the European market and slashed demand for Gazprom’s fuel among power generators.

Gazprom has stuck to its long-term strategy of linking the gas price to oil, which in recent years has been higher than the prices at Europe’s hubs. [Source]