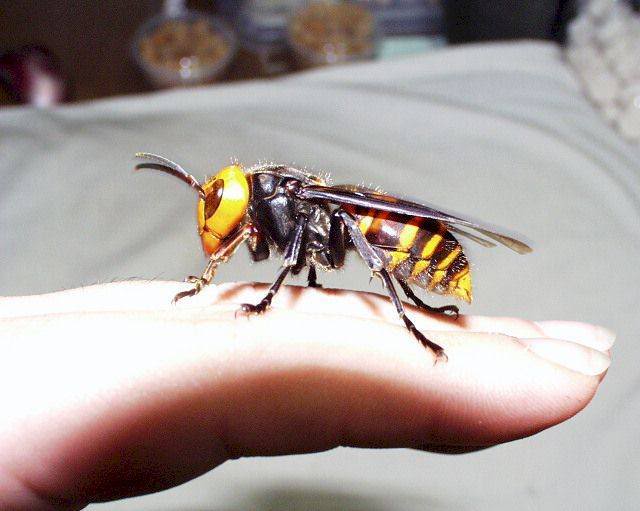 The South China Morning Post reports on 28 deaths in southern Shaanxi Province due to stings by the Asian giant hornet:

A spate of hornet attacks in southern Shaanxi province has resulted in 28 deaths and hundreds of injuries, a local newspaper reported.

Most of those affected are in remote rural areas of the cities of Ankang, Hanzhong and Shangluo, the province’s Chinese Business reported on Thursday.

The thumb-sized hornets, known as Asian giant hornets or Vespa mandarinia, are known for their highly toxic stings. Multiple stings may be fatal to humans without immediate medical treatment. [Source]

While these hornets are common in the area every autumn, the number of deaths this year is unprecedented, which could be attributed to warmer temperatures and new settlement patterns. From The Guardian:

The hornet attacks are a recurring problem in the area from May to as late as November. According to Ankang police, 36 people died in the city and 715 were injured by the creatures between 2002 and 2005. But Zhou said the issue had been particularly severe this year, possibly because of weather changes.

Experts have suggested in the past that warmer temperatures in the area have led to hornets breeding more successfully, that labourers have been moving deeper into areas where they may disturb nests, and that the insects are sensitive to chemicals found in food and cosmetics.

Li Jiuzhou, deputy director of the Shaanxi Bee and Wasp Industry Association, said that hundreds or even thousands of hornets could live in a single nest. They attack humans only if disturbed, he added. But they are carnivorous and can quickly destroy bee colonies. [Source]

A report from Quartz has more on climate change’s role in the species’ swelling population, noting that similar species are beginning to flourish elsewhere in the world. The Quartz report ends with the chilling account of one attack:

Why the uptick? The population of Asian giant hornets (vespa mandarinia), as they’re known, has surged largely because of climate change, says the Shaanxi Provincial Forestry Department (link in Chinese). The average winter temperature in Ankang rose 1.10 ℃ in the span of a few years alone, allowing more hornets to survive the winter. And it’s not just China; rising temperatures are behind the spread of another deadly Chinese hornets species, vespa velutina, in South Korea and Europe.

[…]Here’s a chilling scene that Chen Changlin, an Ankang farmer, witnessed one evening a few days ago. As he harvested rice on evening, hornets swarmed a woman and child working nearby. When they reached Chen, they stung him for three minutes straight. Chen made it; the other two died. “The more you run, the more they want to chase you,” said another victim, whose kidneys were ravaged by the venom. When he was admitted to the hospital, his urine was the color of soy sauce. [Source]