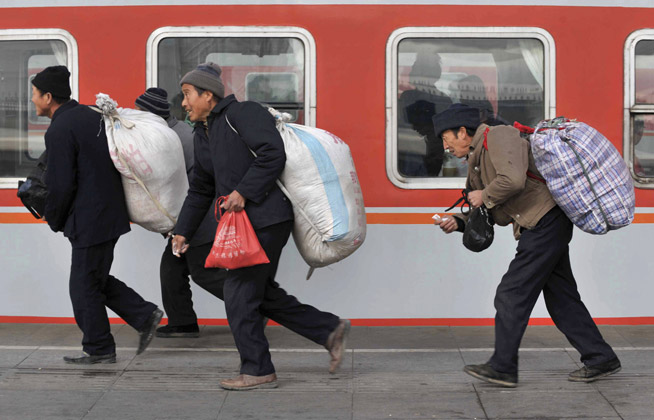 According to a newly released government report [zh], China’s “floating population” has grown to account for one sixth of the country’s total population. Xinhua reports:

China has 236 million floating people – those who left their places of origin to seek employment or education elsewhere – in 2012, one sixth of its total population, with more than half of those labor-age born after 1980, said a health official on Tuesday.

Wang said 75 percent of the new generation left their hometown before they were 20 years old, and more than 70 percent expect to settle down in big cities. [Source]

Coverage from the Global Times notes that as their numbers are growing, China’s migrants are also becoming more educated and politically aware:

“Compared with the previous generation, the new one tends to safeguard their rights and their awareness of political participation has also increased,” said Wang Qian, director of the floating population division of the commission.

Niu Fengrui, former director of the Institute for Urban and Environmental Studies under the Chinese Academy of Social Sciences, told the Global Times that the new generation is better educated and less familiar with rural life, which explained their willingness to pursue opportunities in urban areas.

“This new generation is a new driving force for urban construction thanks to their adaptability,” Niu said, adding that the migrant population is more likely to cause civil unrest if the cities fail to fully accommodate them. [Source]

Niu’s comment reflects the fact that, due to the restrictions of the hukou, or household registration system, the cities in which migrants toil have been notoriously unable to provide social services for their implanted labor force. While policy can partly account for this lack of accommodation, a report from China Labor Bulletin looks to Shanghai to demonstrate that local residents are also resistant to the idea of providing migrants with the social services they need:

Diao Qianwen, a six-year-old migrant from Shandong who lives with her grandparents in a Shanghai vegetable market, was initially denied a place at a local primary school because her parents were absent and her grandparents could not prove they were her legal guardians. Moreover, since her grandparents had no way of contributing to the city’s social insurance fund, even if they could prove guardianship, Qianwen would still not be eligible for a place in the city’s school system.

It was only after a sympathetic journalist broadcast Qianwen’s story on national television that the school authorities finally relented and allowed her in. And even then, Shanghai residents took to the social networks to complain about migrants using up precious resources that should be reserved for Shanghai residents alone.

The bigoted opinions voiced against migrant workers and their families are of course long-standing and widespread but it is at least encouraging that local government officials can be flexible and bend the rules on behalf of the disadvantaged when necessary. [Source]

Earlier this week, the explosion at a school in Guilin was linked to a migrant worker, allegedly frustrated that his child had been denied entrance to a local school. For more on China’s migrant population or the hukou system, see prior CDT coverage.