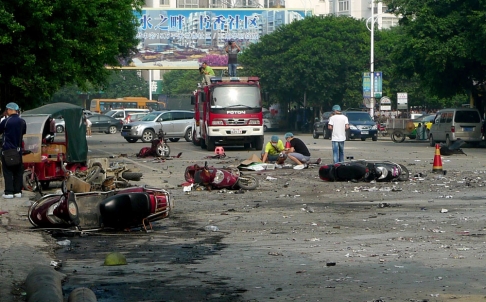 The explosion at a school in Guilin has now been linked to a migrant worker who was in a dispute with the school after his child was denied admittance. The blast killed two, including the suspect and another adult, and injured 44, including 22 children. The South China Morning Post reports:

“According to the initial findings, the man was in his 30s and had argued with the school’s management after he was told his child was not qualified to gain admission,” the source said.

Police are still investigating the incident but have not stated what the explosives were.

According to the Beijing News, the motorcycle driver was from a nearby county and worked in Guilin, in Guangxi . Surveillance video showed the motorcycle catching fire and then exploding, the report said.

The blast left a dozen motorcycles strewn around the site and broke the windows of cars and stores near the school. [Source]

In Chinese media, the principal of the school had previously denied reports that he was involved in a personal feud. From AFP:

“Some media said the cause of the explosion could be somebody involved in a feud with the school principal, who took his retaliation to extremes,” said the People’s Daily, the mouthpiece of China’s ruling Communist party.

“Yesterday, the principal Qin Zhuanhong denied the claim, saying he had very few enemies and he does not know the blast site tricycle driver.”

Officials in the southern city, in the Guangxi Zhuang Autonomous Region, also said reports that the principal was involved in a feud were “simply rumours” that police had not confirmed, the newspaper said. [Source]

While the exact circumstances of the blast in Guilin are unclear at this point, migrant workers elsewhere have faced challenges when trying to enroll their children in local schools. In Shanghai, parents at a local school protested when the migrant worker grandparents of a young girl enrolled her. From the South China Morning Post:

Among other accusations, locals say rules were trampled on to secure Diao a place in the school – contrary to Shanghai’s strict rule-of-law spirit.

On top of that, the little girl is accused of using educational resources intended for Shanghai’s own children – many of whom already have a hard time getting a school seat.

“I do feel sympathetic for her, but our own children will have no place to go,” a Shanghai native commented on Weibo, “What happens after this? Millions of out-of-city children will want to go to school in Shanghai, and they will have all kinds of excuses.” [Source]

Read more about the education of children of migrant workers in China’s cities, via CDT.