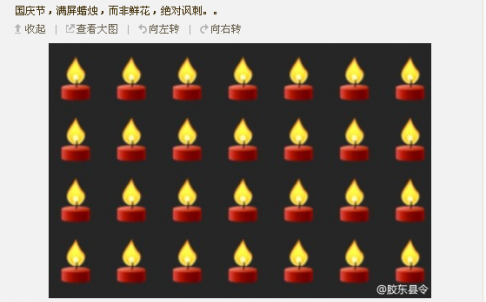 As China celebrated its 64th National Day on Tuesday, and top officials flocked to Tiananmen Square amid a heavy fog in Beijing, bloggers exploited a loophole in the “Great Firewall” and paid tribute to the victims of the 1989 military crackdown. From the South China Morning Post:

Bloggers jumped at the rare chance to mention and discuss the word “64”, referring to June 4th, allowed by online censors though still strictly monitored, by paying condolences to the students and civilians who died in the 1989 incident.

“64, hard to forget,” a Zhejiang blogger wrote, posting a photo of what looked like an official flower display featuring the number “64” and the Chinese words “hard to forget”.

[…] Li Guobin, a Shenzhen-based lawyer, in a weibo post that was quickly censored, urged his Chinese compatriots to mourn the countless lives lost since 1949 when the Communist Party came to power. [Source]