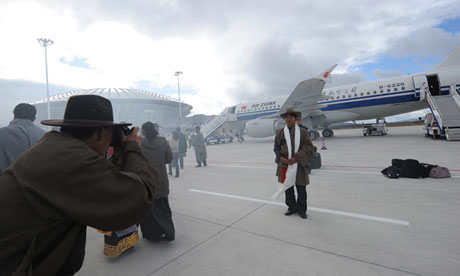 The world’s newest and highest airport is in Tibetan Sichuan, and USA Today’s Calum MacLeod reports that Beijing’s push to invest in transportation on its western frontier has been met with cautious optimism.

China hopes the airport will encourage tourism in an area of spectacular peaks, lakes and meadows at the nearby Yading nature reserve, known in Chinese as “the last Shangri-La.” And some Tibetans are looking forward to making money off a pristine Himalayan land of snowy peaks, unique wildlife and colorful culture barley touched by the outside world.

But the $258 million single-runway airport also courts controversy. Tibet chafes under Communist rule and the airport allows Beijing to extends its reach into a region simmering against the authorities and worried about China’s overlooking of environmental damage in the name of economic expansion.

“The Central Tibetan Administration welcomes all developmental projects in Tibet, and we think Tibet should not be off-limits or beyond reach of the global community,” he said. [Source]

The travel time between Daocheng Yading to the provincial capital of Chengdu has been cut from two days by bus to just over an hour, and The Associated Press said that troops now can be more easily deployed to the area in the event of unrest.