Should The U.S. Draw A North Korean Buffer Line? 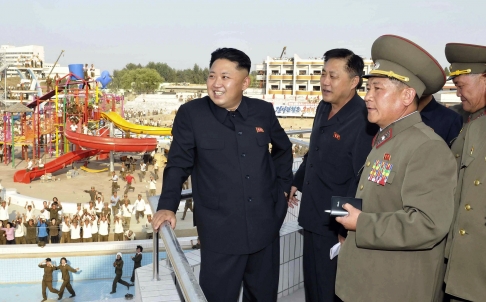 A new study by American research institute Rand Corp urges the United States to negotiate a separation line with China in case North Korea collapses, according to the South China Morning Post:

The report by Rand Corp, a prominent US research institute, said that the crumbling of the totalitarian state could trigger a new, severe famine as well as a human rights crisis in a country that holds hundreds of thousands of prisoners.

The United States and its ally South Korea would almost certainly intervene, causing alarm in China, which is North Korea’s primary ally, the study said.

China, whose perceived interests include stemming the flow of refugees and preventing US forces from approaching its border, could also send troops into North Korea and risk a confrontation with US or South Korean forces that could quickly escalate, the report said.[Source]

The warning to decide on a dividing line comes at the same time as Chinese officials celebrated the tenth anniversary of the establishment of the Six Party Talks which the US, Japan, and South Korea all boycotted, according to Scott Snyder in The Atlantic:

In his opening remarks, China’s Foreign Minister Wang Yi, who had served as China’s head of delegation in the early days of the Six Party Talks, stated that “denuclearization and peace and stability are directly connected and mutually reinforcing,” charged all the parties to recommit to the Joint Statement, and advocated for institutionalization of the Six Party Talks, reflecting a renewed Chinese investment of political capital to restart talks. But this diplomatic initiative will prove to be a heavy lift. Absent at the commemoration were American, Japanese, and South Korean high-level representatives who boycotted the ceremony in the absence of North Korean commitments backed by action to return to denuclearization.

Under the watchful eye of his Chinese hosts, North Korea’s Vice Minister Kim Kye-Gwan read a written statement shifting blame to the United States before pledging North Korea’s recommitment to denuclearization and calling for a resumption of talks “without preconditions.” It was the least he could do to meet the requirements of the occasion. Following Kim’s begrudging performance, Wang Yi is spending the anniversary of the Six Party Joint Statement in Washington for consultations with his U.S. counterparts.[Source]

Meanwhile, The Global Times reports that “Pyongyang and Beijing have been more proactive than Washington and Seoul” about negotiations involving leading officials participating in the Six-Party Talks:

“Washington and Seoul have shown a willingness to resolve the peninsula nuclear issue, but at the same time they have drawn a red line – asking Pyongyang to give up nuclear weapons,” said Teng Jianqun, member of the China Arms Control and Disarmament Association and a CIIS scholar.

Such policy designs – with too many preconditions – by the US and the ROK are negative and unfavorable for a resolution, Teng said.[Source]

Read more about the Six-Party Talks via CDT.