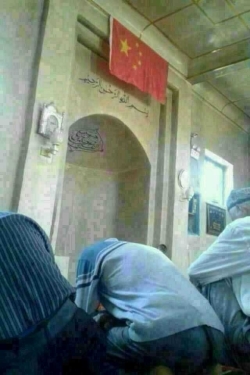 Al Jazeera reports on a Chinese flag installed in a mosque in Aksu, western Xinjiang Autonomous Region. The Flag’s placement means that local Uyghurs must bow to the five stars when performing the second pillar of Islam:

The local government in the Xinjiang Uighur Autonomous Region’s Aksu area placed the flag over the mihrab — the traditional prayer niche that points the direction to Mecca — prominent Uighur rights advocate Ilham Tohti told Al Jazeera. He called it an effort to “dilute the religious environment” in the area, where minority Uighurs often complain of ethnic and religious repression.

Reports from Uighurs in the area said the placement of the flag has upset residents amid a series of fresh religious restrictions, which analysts say Beijing hopes will integrate Uighurs into Chinese society and pacify the strategically important region. Xinjiang is perennially rocked by clashes between Muslim Uighurs and China’s majority ethnic Han Chinese.

“They placed the flag at a very sensitive place in the mosque,” Tohti said, explaining that he has seen Chinese flags prominently positioned in mosques in China before — but never in such a sensitive spot.

“They are essentially saying the flag is higher than religion,” he said. [Source]

This move to emphasize Beijing’s sovereignty in the ethnically distinct region comes after a summer of turbulence: in late June, a crackdown on a Turpan riot left 35 dead; in early July unrest erupted in Hotan; in August a riot broke out in Aksu; and earlier this week, Radio Free Asia reported that 12 Uyghurs were killed outside of Kashgar in August as authorities raided what they deemed a “terrorist facility”. Meanwhile, Xi Jinping recently outlined plans to engage with Central Asia by building a “Silk Road Economic Belt”—a strategy that calls for stability in Xinjiang. The Diplomat notes that, in order to facilitate plans for Central Asia, Beijing must adopt a stance more sensitive to Xinjiang’s population:

[…]What is missing, it seems, is an overarching vision that seeks to reach beyond simply making everyone wealthy, but also tries to address some of the fundamental underlying social and ethnic tensions that boil beneath the surface. Xinjiang-ren, or those who consider themselves natives of the province, will clearly not be happy just to be given jobs, trade prospects and prosperity. A larger, more holistic picture must be painted and one that is not solely reliant on trade or an iron fist. This must be the legacy of the New Silk Road: reconnecting Xinjiang and opening up the province in every way to enable it to prosper once again.

China is Central Asia’s most consequential power, a consequence of the intense focus on the region through Xinjiang. If Beijing really wants this policy to work, then it will need greater nuance and focus to transform it from a money-driven theory to one that better reflects local realities. [Source]