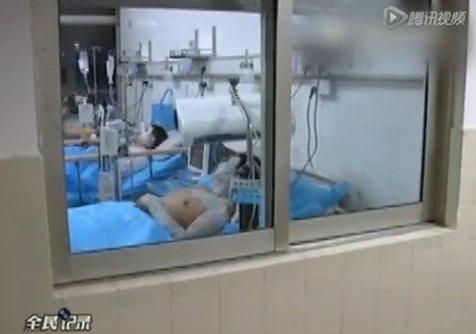 The South China Morning Post reports that 18 chengguan were hospitalized this week in Xiamen, Fujian province after being attacked with sulfuric acid:

News of the incident first hit the Chinese internet on October 16, when a user nicknamed “xao xiaoxiang” posted word of the attack on Sina Weibo,The Beijing Times reported.

“In the early morning today in the Tong’an district of Xiamen city, three chengguan officers were attacked with sulfuric acid and are now receiving medical assistance in the hospital,” the post read.

[…]Sina Weibo users commenting on this latest development pointed out the irony of chengguan now being victims of violence themselves, and one vehement poster said that it was “a good thing” that the officers were now “suffering pain and despair”.

“Chengguan have indeed committed many misconducts, but this [attack] of sulfuric acid is too cruel,” a more sympathetic member of the online community wrote. [Source]

Chengguan, or members of city Urban Management Enforcement Bureaus (城市管理行政执法局), are infamous for brutally, and sometimes fatally, enforcing the law on unlicensed street vendors. Human Rights Watch has paid close attention to abuse at the hand of chengguan, and last year released a full report on the subject. After the story of the acid attack in Xiamen broke, HRW’s China director tweeted:

Chengguan have long been the targets of public scorn due to their tendency towards heavy-handed enforcement techniques and to their lack of legal accountability relative to the street vendors who sometimes strike back. Last month, Xia Junfeng was executed for killing two chengguan despite stating to the court that he had acted in self-defense. The Global Times reports that officers standing trial for the death of a vendor are often not subject to criminal penalties:

A majority of the 16 widely covered cases since 2000, in which vendors died from physical altercations with urban management officers, or chengguan, during law enforcement, resulted in the accused being exempted from criminal penalties, the Southern Weekly revealed on Thursday.

The newspaper analyzed the 16 major cases involving the controversial law enforcement techniques of the urban management officers and found only five cases where chengguan were sentenced to jail terms under criminal charges.

In 11 cases, the final critical causes of the victims’ deaths were mainly attributed to victims’ health problems. Among the five cases with criminal penalties, no chengguan was charged with intentional homicide, and most were only charged with the crime of intentional injury.  [Source]

Recently, the Global Times also published a report sympathetically profiling the father of one of the officers killed by Xia Junfeng, and highlighting social media commentary critical of his wife’s efforts to publicize the case. In the lead up to the execution and as many Chinese netizens were expressing support for Xia, China’s propaganda department issued official directives on the case, and after the execution many terms related to Xia were blocked on Sina Weibo.

While some municipalities have launched campaigns aimed at restoring the image of chengguan, others are now applying further regulations on their fleet of urban management officers. In the southern city of Guangzhou, which this year saw both high profile abuse by chengguan as well as violent counterattacks by vendors, new rules have recently been implemented. Danwei reports:

The new regulations, entitled “Guangzhou Metropolitan Comprehensive Law Enforcement Work Standards” (广州市城市管理综合执法工作规范), state clearly that chengguan may not use profane or threatening language while enforcing their duties, may not damage private property, and may not use any form of violence or intimidation. As is well known, the chengguan can definitely do with some anger management (see for example previous Danwei post here).

[…] In all the new “Work Standards” comprise 157 clauses in 13 chapters that collectively aim to provide clear operational procedures for chengguan law enforcement operations. The new rules state that chengguan are not permitted to use any kind of cold or harsh language with the public, and neither should they use sarcasm, profanity, threats and intimidation. In fact, the new rules include a basic formulation for how chengguan should address the public, starting with “Hello” and including “please”, a clear explanation of any actions taken by the chengguan, and ending in “thank you”. If any chengguan should find himself beingheckled by the public, he should kindly explain his actions to them and state his service number. [Source]

As public distrust for chengguan continues, brutal counterattacks are reported, and tighter regulation is applied to some of China’s many urban management officers, the Global Times surveys netizen reactions to the difficulty one officer is having with his love-life:

Finding love is no easy job for a chengguan

A bachelor suspects that his job as a chengguan, or urban management officer, is getting in the way of his love life, after being turned down by 14 women from a string of unsuccessful blind dates.

The unnamed man’s romantic failures have captivated Net users, some of whom are sympathetic to his situation while others believe that the chengguan – who works for a group of officers with a notoriously bad rap in China, resulting from a series of high-profile cases of chengguan beating on civilians in recent years – is getting what he deserves.

The chengguan said that given the criteria he meets, he could not understand why most bachelorettes did not see him as a catch. [Source]