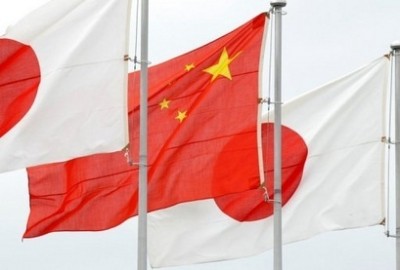 Though Japanese prime minister Shinzo Abe has thrice refused calls for him to visit the controversial Yasukuni Shrine, his decisions to send ceremonial offerings still draw the ire of China. On Thursday, a Chinese Foreign Ministry spokeswoman urged Japan to deal with the site and acknowledge its place in history:

Hua’s remarks came as the shrine marked its annual autumn festival. Abe paid for a “masakaki” tree offering traditionally used in Shinto rituals at the shrine on Thursday morning but refrained from visiting.

The shrine, which honors Japanese war dead, including 14 class-A war criminals, is considered a symbol of Japan’s past militarism.

Hua said China has repeatedly stated its attitude and position on the Yasukuni Shrine issue.

“We again urge the Japanese side to face up to and make real introspection for its history of aggression, respect the feelings of people in war-victim Asian countries, including China, and properly deal with relevant issues,” she said. [Source]

While China and Japan have enjoyed relatively cooler relations in recent weeks, The Diplomat’s Kerry Brown wrote Tuesday that mistrust lingers. He points to Oxford University scholar Rana Mitter’s book on the Sino-Japanese War as key to understanding the complex relations between the two sides:

Mitter covers the great landmark events in this aggression – including the Nanjing massacre, in which civilians were left to take the brunt of a mechanized Japanese onslaught, the frenzy of which still lives in the collective memories of Chinese to this day, and also the fall of Shanghai early in 1937. His book also powerfully demonstrates one fact that is often forgotten now, that China was an ally of the U.K. and the U.S. in this conflict. And despite unimaginable suffering and horror at the hands of invading waves of Japanese soldiers, the Nationalists and Communists in their United Front never surrendered. There were plenty of times when factions within China, the most famous led by nationalist politician Wang Jingwei, counseled for a tactical surrender. Had their advice been heeded, then the whole Pacific area would have been opened to Imperial Japan’s armies. That alone would have made the outcome of the global war more complicated than it was already. The U.S. and its allies would have had to try and overtake a vast territory under occupation, with the chance the conflict could have continued for many more years.

The Chinese armies did not surrender, even though the odds against them were often staggering. The Chinese people at this time suffered famine, rape, brutality and mistreatment at the hands of invaders, the ill-disciplined and corrupt local elites. U.S. assistance, via figures like General Stilwell, was often too little. By Mitter’s reckoning, the U.S. figured that China was a side story to the European fight, and was one that needed few resources and even less attention. Stilwell’s imperious attitude to Chiang Kai-shek led to the start of distrust in the relationship, which lingers to this day.

For the Chinese, the only conclusions that can be drawn from such a war were that the Americans are shallow allies and the Europeans are a source of endless trouble and interference, always trying to protect their own interests at the expense of others. Meanwhile, at China’s moment of vulnerability, the Japanese people revealed a murderous ruthlessness and nearly annihilated their country. Of course, it was the parlous Qing and Republican elites who had left China in such a weak state before this conflict started. But no country deserved the suffering that China experienced from 1937. [Source]

In the The New York Times today, Mitter noted that because China and Japan never signed a peace treaty after World War II, China’s role in the wartime victory over Japan was never fully recognized:

But recently a new political openness within China itself has allowed a different picture of the war years to emerge. Chiang and Mao are long dead, and the Chinese government has been trying to claim a greater international role by reminding the world of the benefits of its past cooperation with the West.

Eager to eventually reunify the mainland with Taiwan, Beijing has also adopted a more favorable attitude toward Chiang’s legacy. Chinese filmmakers and academics now have license to talk more freely about the Nationalists’ wartime contribution, whether in television dramas or scholarly articles. A lengthy and sympathetic biography of Chiang by Yang Tianshi, a historian at the Chinese Academy of Social Sciences, has been a big seller on the mainland. Chiang’s old wartime villa outside Chongqing has even been restored as a shrine of sorts, with pictures and captions describing him as a patriot who stood firm against the Japanese — a rehabilitation of Chiang’s reputation that would have been unimaginable under Mao.

This revision of history has significant consequences for East Asia and Southeast Asia today. If America’s leadership in defeating Japan in 1945 continues to justify a U.S. presence around the Pacific today, Chinese leaders feel, why shouldn’t China’s contribution to the same goal earn it some clout in the region? Beijing is trying to cash in today a geopolitical check Chiang Kai-shek wrote nearly seven decades ago. [Source]