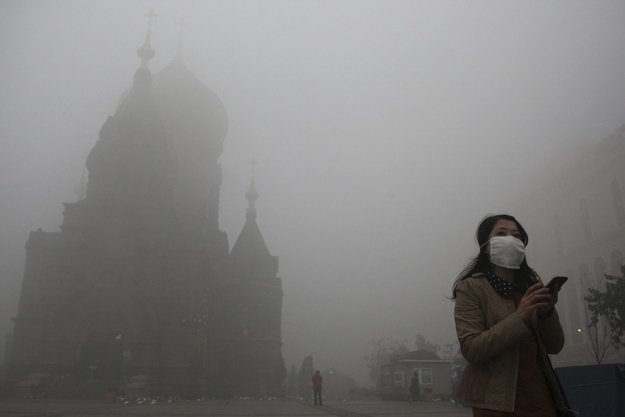 As winter approaches, it means the beginning of heavy-smog season in China. Currently, the northeastern city of Harbin is smothered in a thick blanket of particulate matter that the AP reports is 40 times higher than the international safety standard:

Visibility shrank to less than half a football field and small-particle pollution soared to a record 40 times higher than an international safety standard in one northern Chinese city as the region entered its high-smog season.

[…] Winter typically brings the worst air pollution to northern China because of a combination of weather conditions and an increase in the burning of coal for homes and municipal heating systems, which usually start on a specific date. For the large northern city of Harbin, the city’s heating systems kicked in Sunday, and on Monday visibility there was less than 50 meters (yards), according to state media.

[…] The density of fine particulate matter, PM2.5, used as an indicator of air quality was well above 600 micrograms per cubic meter — including several readings of exactly 1,000 — for several monitoring stations in Harbin, according to figures posted on the website of China’s environmental protection agency. They were the first known readings of 1,000 since China began releasing figures on PM2.5 in January 2012, and it was not immediately clear if the devices used for the monitoring could give readings higher than that.

A safe level recommended by WHO is 25 micrograms per cubic meter. [Source]

The New York Times reports on how this record bout of air pollution is complicating life in Harbin:

School was canceled, traffic was nearly paralyzed and the airport was shut down in the northeast Chinese city of Harbin on Monday as off-the-charts pollution dropped visibility to less than 10 meters in parts of the provincial capital.

[…]On Monday, people in Harbin were covering their heads and mouths with scarves and masks to ward off the choking smell in the air. Despite government warnings to stay home, cars with headlights turned on were moving no faster than pedestrians and honking frequently as drivers struggled to see traffic lights meters away, the city’s official news site said.

At an emergency meeting called at 6 a.m., the authorities decided to close all schools and kindergartens, the report said. The local police also shut several highways at 7 a.m., but not before the smog caused two pile-ups, which left one truck driver injured, the official Xinhua news agency reported. (Nearby Jilin Province also reported 14 road accidents on Sunday night; the authorities there issued a red alert for pollution Monday morning.)

The pollution in Harbin has caused a 30 percent surge in hospital admissions of patients with respiratory problems, according to the local news media. Residents have been told by doctors to wear masks and eat pears, a fruit commonly believed in northern China to help heal lungs. [Source]

For visuals from heavily-polluted Harbin, see photo galleries compiled by the Wall Street Journal, BuzzFeed, and Caixin, or video footage from Euronews:

The PM2.5 readings from Harbin have surpassed those from Beijing’s “Airpocalypse” back in January, an event that garnered enough publicity to prompt officials to confront the issue. A recent post from China Dialogue looks at how Beijing could guard against another “Airpocalyptic” smog season:

The first and most influential response would be to accelerate the process of scaling back coal consumption. Back in September, the Chinese State Council issued its most comprehensive plan to tackle air pollution to date. Controlling coal consumption is a feature element of this document. Combined with commitments from the provincial areas of Beijing, Tianjin, Hebei, and Shandong, China aims to reduce coal consumption from these four provinces by 83 million tonnes by 2017 – the first time in history that the government has mandated negative growth targets for coal.

However, the exact roadmap of the reduction is unclear. There are already numerous precedents where Chinese officials have outlined ambitious targets only to later face difficulties in fulfilling them. The last minute hustling by provinces to try to achieve energy intensity targets in 2009 is the most prominent case in point.

Apart from coal, an emergency plan for severe air pollution days would also help. An interim emergency plan has been provisionally applied in Beijing since last winter. The final plan, which is expected to be released by the end of this year, is likely to be a beefed-up version of the interim plan. Leaked information has suggested that Beijing will implement an “odd-even” vehicle ban for heavily polluted days similar to the one imposed for the 2008 Beijing Olympics. This is a scheme where cars are only allowed on the roads on alternate days depending on their odd or even plate numbers. It is unclear exactly under what circumstances the government would impose the ban, but its imposition would effectively bring half of Beijing’s six million vehicles off the road on a given day. [Source]

Beijing’s municipal government on Thursday adopted an emergency-response plan for air pollution that includes implementing alternate driving days for cars with even- and odd-numbered license plates during nasty stretches.

[…] But even if the air outside is particularly bad, don’t hold your breath waiting for it to kick in.

[…T]he new measure will go into effect only when Beijing forecasts at least three consecutive days of “serious” air pollution — when the air-quality index is above 300 on a 500 scale.

Steven Q. Andrews, an environmental consultant who studies the city’s air pollution, said Beijing has experienced that kind of pollution only twice this year. Both instances happened in January during what some Beijing expatriates called the “airpocalypse,” when an air monitor at the U.S. Embassy showed an air-quality index reading of 755. The U.S. Environmental Protection Agency says an index reading of above 300 is “extremely rare” in the U.S. and typically occurs during events such as forest fires.

A report from The Economist has more on Beijing’s emergency response plan, including an outline of its color-coded warning system:

On red-alert days 30% of the government cars will be taken off the road too. Bus and subway services will be expanded, to cope with the estimated 2m extra passengers who are expected to need them. Schools will be closed.

The next level down on the four-tiered colour alert system will be orange, which is to be triggered by three consecutive days of pollution levels that are either “serious” or merely “heavy”. China’s environmental authorities classify readings above 300 on their air-quality index as “serious”; readings of 201-300 are “heavy”.

Under an orange alert, factories will be made to reduce or halt production. Construction work, fireworks and outdoor barbecues will also be restricted. (Never mind that Zhao Huimin, a senior municipal official, drew widespread ridicule earlier this month when he claimed that cooking was to blame for a significant portion of the particulate matter in Beijing’s air. That remark, in Chinese, can be seen here, at the 1:50 mark.) [Source]

National level strategies for mitigating pollution are also being discussed. CCTV reports on an amendment to the environmental protection law being reviewed by the CCP Standing Committee:

Chinese governments at all levels will be given more responsibility in improving the environment, a draft amendment to the environmental protection law, tabled for its third reading on Monday, has outlined.

The bill, which aims to curb China’s deteriorating environment, was submitted to the bi-monthly session of the Standing Committee of the National People’s Congress (NPC), which runs from Monday to Friday.

[…]It stipulates that the state should support the development of the environmental protection industry with policies and measures in finance, taxation, pricing and procurement.

Also see another recent post from China Dialogue on how discontent among China’s urban middle class could lead officials to better uphold environmental principles. For more on air pollution, see prior CDT coverage.