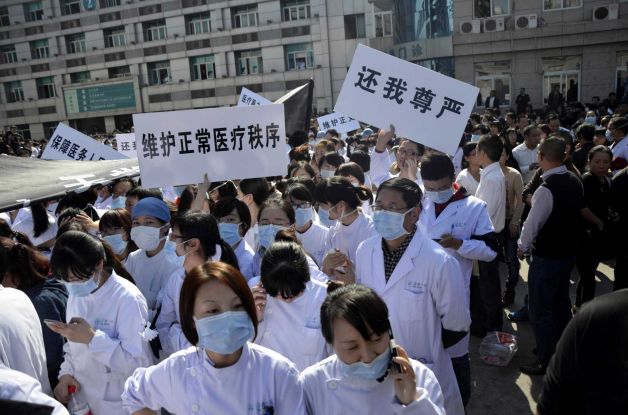 The No.1 People’s Hospital of Wenling saw more than 300 medical workers protesting at the square of the hospital at 8 am, a doctor surnamed Xie, who was one of the protesters, was quoted as saying by The Beijing News on Monday.

They held banners and posters saying that violence should be rejected and the safety of medical workers should be guaranteed, Xie said.

Hundreds of armed policemen flocked to the scene to prevent the crowd from turning violent, but Xie said it was a peaceful protest. [Source]

Factors that led to the recent increase in violence against medical workers include “doctor-patient communication, high patient expenses and dissatisfaction with treatment.” From The Wall Street Journal:

Industry watchers say an underfunded health-care system underlies systemic problems in hospitals, which have been in the spotlight in recent months, as authorities are cracking down on medical corruption and foreign pharmaceutical companies in particular. China’s health-care system also lacks a set system through which patients can take legal action when there are disputes or missteps in treatment.

Doctors say that a shortage in the profession has also meant that existing doctors have heavy patient loads, leaving them scarcely more than a few minutes to meet with each patient and undermining doctor-patient trust. There were 1.4 physicians per 1,000 Chinese citizens in 2010, compared with 2.4 per 1,000 that year in the U.S., according to World Bank data.

Deep dissatisfaction within the health sector is growing among doctors, according to surveys. In a 2011 Chinese Medical Doctor Association survey of 6,000 doctors, 95% said they were underpaid and 78% said they wouldn’t want their children to study medicine. [Source]