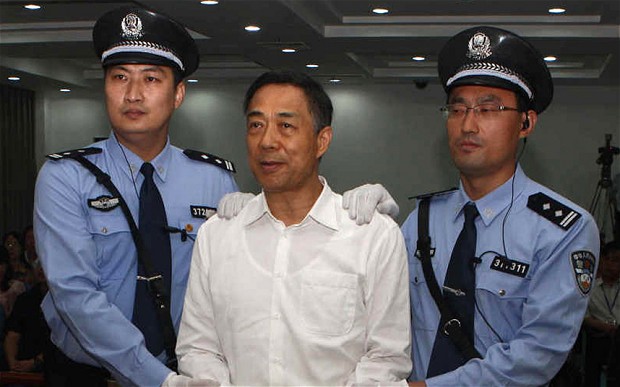 Following state media reports that a decision on Bo Xilai’s appeal will be announced on Friday morning, The Telegraph’s Tom Phillips notes the disparity between official claims of openness and the secrecy with which the appeal appears to have been conducted.

Chinese state media trumpeted the original five-day trial, held in the eastern city of Jinan, as an “historic” example of transparency and a victory for the rule of law.

But on Monday a source with direct knowledge of the case confirmed to The Telegraph that despite official promises of an open and transparent judicial process, the former Chongqing party chief’s appeal had in fact been held behind closed doors.

[…] Kerry Brown, the executive director of University of Sydney’s China Studies Centre, said the private appeal showed Mr Bo had not been “compliant enough” during his August trial and was “not going to get another moment of shooting his mouth off to the country.” This time, senior leaders had decided “to do it the good old-fashioned way,” Prof Brown added. [Source]

See more on Bo Xilai including coverage of his trial, its immediate aftermath and the sentence that followed via CDT.

Updated at 18:23 PST: South China Morning Post’s Keith Zhai reports that Bo may, in fact, be allowed to speak at Friday’s announcement:

“Bo is preparing to make a statement in court, but the authorities may not allow him to do that,” said one of the two sources, who did not want to be named. “He is in good health and mental condition at Qincheng prison.”

The Shandong Provincial Higher People’s Court said on its website yesterday that it would “announce a decision regarding the bribery, embezzlement and abuse of power case of the appellant Bo Xilai” on Friday morning. The court said the hearing would be “open”, but gave no details.

The two sources, who have direct knowledge of the case, said Bo (pictured) would make what could be his last public appearance at the hearing, a rare act under the mainland’s court system, which commonly handles appeals in secret. [Source]