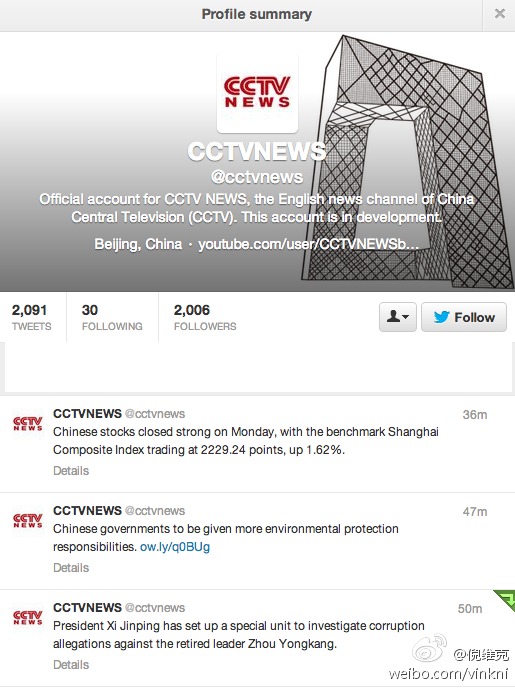 Yesterday, an exclusive report from the South China Morning Post said that the Chinese government had set up a special investigative unit to handle the case of former security chief Zhou Yongkang. Later in the day, a tweet from the official CCTV account surprised many by nonchalantly announcing the investigation.

Soon, CCTV issued a statement claiming their Twitter account had been “targeted” and the news was “illegal”:

The Post has reported exclusively on a decision taken by Xi at the Beidaihe leadership retreat in August to pursue the investigation into allegations of corruption.

The CCTV tweet followed a report by the South China Morning Post earlier in the day revealing that President Xi Jinping had formed a special task force to pursue the high-profile case. Chinese media have not reported on an investigation into Zhou and access to the Post’s website was blocked in the country on Monday. [Source]

The New York Times’ Sinosphere blog reports on why the CCTV tweet was out of character:

On Oct. 1, Mr. Zhou made a public appearance at the China University of Petroleum, dampening speculation that he would soon be toppled in a corruption inquiry. While formal accusations have not been made against Mr. Zhou himself, party insiders have said the investigations have encroached on his family, especially his son Zhou Bin.

Though CCTV, or China Central Television, is generally considered a reliable source for official state pronouncements, its original post seemed off to many observers.

For one, it came without the fanfare typical of announcements as big as this, a formal investigation into a retired Politburo Standing Committee member. Unlike last year in September, when Xinhua, the state news agency, announced the expulsion of the disgraced politician Bo Xilai in a timed and coordinated effort across multiple platforms on the Internet and on television, no mention was made of the purported investigation into Zhou on any of the other official social media accounts or Web sites. [Source]

On Twitter, some pointed out the irony of the official news broadcaster using a social media platform that is blocked in the country: