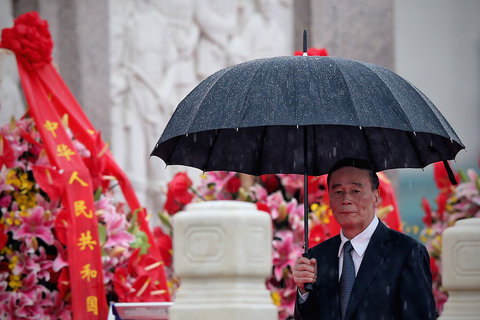 South China Morning Post reports that the formation of a special police unit to deal with corruption investigations centered on former security chief Zhou Yongkang shows a lack of faith in the Party’s own investigative organs.

The arrangement is unusual and reflects not only the sensitivity of Zhou’s case but also Xi’s personal interest in it. Corrupt officials are usually dealt with by the party’s Central Commission for Discipline Inspection (CCDI) and kept incommunicado in an extra-legal, internal system of detention called shuanggui for interrogation before being handed to police and prosecutors.

[…] It is believed that Xi and CCDI head Wang Qishan wanted police who are more experienced with criminal investigations to handle the investigation rather than the CCDI, whose abilities and methods have been questioned recently.

[…] The first source said a series of “bold reforms” of CCDI was expected to be announced after the party’s keynote meeting next month. [Source]

One question mark over the CCDI’s activities is the occurrence of prisoner abuse during its investigations. Fallen Chongqing Party chief Bo Xilai claimed during his trial that he had fainted 27 times during questioning and that investigators had threatened his family. Five of the commission’s officials were convicted last week over the death of a detainee who had been deprived of sleep, beaten, apparently burned with cigarettes and bitten, and finally drowned.

The SCMP report highlights the role of Beijing police chief and deputy public security minister Fu Zhenghua, said to be heading both the Zhou investigation and a major ongoing crackdown on influential weibo posters. See more on Zhou’s case in a recent Financial Times report that noted the detention and questioning of his son, Zhou Bin, and via CDT.

The CCDI remains at the reins of another high-profile case, that of Nanjing mayor Ji Jianye, who was first detained and then formally dismissed last week. But Ji’s case also appears unusual, according to Russell Leigh Moses at China Real Time:

Typically, announcements of an investigation and confinement of a high-ranking cadre that appear in the state-controlled press are terse and uninformative. That’s how the Nanjing media covered the event (in Chinese).

But the official coverage out of Beijing went far further this time, noting Ji’s ties to a Suzhou construction company that worked on major infrastructure projects in Nanjing (in Chinese) and accusing him of taking at least 20 million yuan ($33 million) in bribes (in Chinese).

It’s rare for an official’s connections with local businessmen to be mentioned publicly so early in an investigation. By calling attention to that relationship, Party disciplinarians were out to demonstrate that Ji fit the profile of an imprudent and immoral cadre. But the Party media machine was also revved up quickly to prevent social media from getting its usual jump on the news, before Weibo users could start speculating about the reasons for Ji’s dismissal. Beijing is now especially attentive to making its case before others do it for them. [Source]

As the tigers and flies continue to fall, Wang Qishan acknowledged that the life of an honest official might sometimes feel lonely. From Didi Kirsten Tatlow at The New York Times’ Sinosphere blog:

[…] Deal with it, was Mr. Wang’s message to the “Honest Government Research Study Class” on Wednesday, delivered in characteristically rousing language. (The state news agency, Xinhua, which reported on the session, did not say where it took place.)

“Less embroidering flowers, more carrying coals in the snow,” said Mr. Wang, who is a member of the seven-man Standing Committee of the party’s Politburo, the inner circle of power, Xinhua reported. “To forge iron you need a strong body,” he said, exhorting officials. He described the fight against corruption in the party as “serious and complex.” [Source]