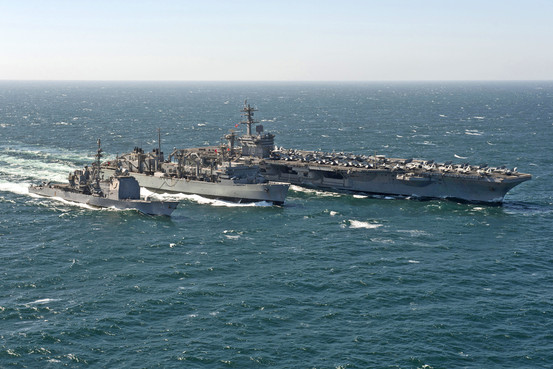 The Diplomat’s Zachary Keck reports that China has passed the U.S. to become the world’s largest net oil importer:

“China’s steady growth in oil demand has led it to become the world’s largest net oil importer, exceeding the United States in September 2013,” the EIA said in a report this week. Specifically, last month China’s consumption was 6.3 million barrels per day higher than its production, compared to the U.S. where consumption outstripped production by 6.1 million bpd.

[…] Ultimately, China seems destined to rely far more heavily on foreign oil than the U.S. is in the decades to come. This is due in no small part to the United States’ rising production levels, greater efficiencies and the fact that its economy isn’t likely to grow as fast as China’s economy, assuming Beijing avoids a hard landing. Even the imports the U.S. does maintain are likely to be overwhelmingly from North America and the Western Hemisphere, whereas China’s will have to pass through long maritime shipping routes on their way to Beijing from the Persian Gulf, Western Hemisphere and Africa. [Source]

When the U.S. Energy Information Administration predicted the shift in August, analyst Amrita Sen told the BBC that the U.S. still imports considerably more overall: this is offset by American exports of some 3.4 million barrels a day. Nevertheless, Ed Crooks and Lucy Hornby wrote at The Financial Times that “the implications for international relations and global security are profound”:

In the US, politicians and analysts are asking if a reduced thirst for imported oil will allow Washington to extricate itself from the Middle East. The real question, though, is not whether a more self-sufficient America will get out of the region but whether a more dependent China will be forced in. As David Goldwyn, a former US state department official who is now an energy consultant, puts it: “The Chinese are much more vulnerable to oil prices and oil insecurity than they have ever been.”

[…] “That makes the world a more secure place because China is much more linked up with world’s security agenda and with market economics,” he says. “It cannot be a free rider or a lone wolf: it is obliged to participate more. And that’s a good thing.” [Source]

For now, however, China’s lagging participation is a growing source of tension with the U.S., according to Brian Spegele and Matt Bradley at The Wall Street Journal:

The turnabout has added to tensions because it leaves the U.S. military securing China’s growing oil shipments in the region at a time Beijing resists U.S. pressure on it to back American foreign policy in the Middle East.

For years, China and other oil-consuming nations have benefited as Washington spent billions of dollars a year to police chokepoints like the Strait of Hormuz and other volatile parts of the Middle East to ensure oil flowed around the globe.

[…] At an April Brookings Institution conference in Washington, D.C., when the former head of China’s National Energy Administration, Zhang Guobao, was asked whether China could assume a greater role in protecting the region’s shipping lanes, he responded: “Why don’t the Americans do the job for now.” [Source]