China Sweeps Aside Civilians in Rush for Hydropower 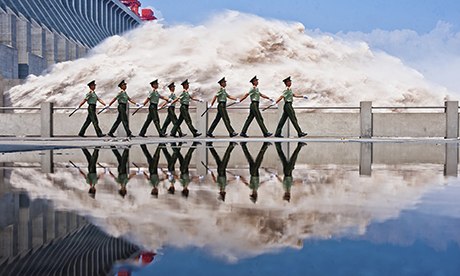 The Guardian reports on the European firms that are helping China build up its hydropower industry, starting with the Xiangjiaba dam on the border of Sichuan and Yunnan:

“Every year the Chinese increase their hydropower capacity by 15GW,” says Yves Rannou, the head of the China division at Alstom, the French engineering firm, a figure the IHA confirms for 2012. This is an impressive achievement compared with new capacity being built in other parts of the world, apart from Asia: 1.9GW in North America, 1.8GW in South America, 0.5GW in Europe and 0.3GW in Africa. It should be borne in mind that France, for instance, has a total hydropower capacity of 25GW.

Downstream from the Xiangjiaba dam, on its righthand side, a tunnel disappears into the rock face. It leads to a cavity like the nave of a cathedral, filled by a dull roar. Without waiting for the structure to be finished, the Jinsha is already driving four Alstom turbines and their generators. They were brought up the river on barges as far as a quay just below the dam.

The four monsters, each weighing more than 2,000 tonnes, were manoeuvred into position by suitably gigantic cranes, mounted on tracks that run down to the riverside.

On 17 September Alstom officially opened a new hydropower industrial site in Tianjin, north-east China. Airbus operates a large assembly unit on the same technology park. The engineering firm is keen to consolidate its position in this booming market. At the ceremony, CEO Patrick Kron predicted that between now and 2035 half of the world’s new hydropower plants would be built in China, with south-east Asia accounting for 85% of the total. He added that hydropower was “clean, renewable and particularly easy to store”. [Source]

Read more about hydropower in China, via CDT.