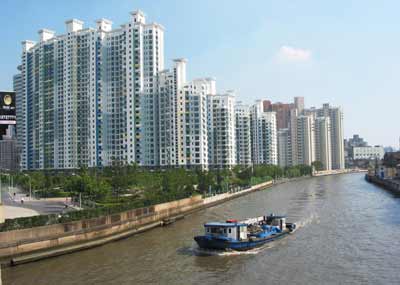 Anne Stevenson-Yang, the American co-founder of J Capital Research, paints a gloomy picture of China’s property market and wonders when, not if, the bubble will burst. From Forbes:

To some of us, it is almost unfathomable that the Wall Street Journal, in a recent report, could write: “There is currently a supply crunch of homes in major cities like Beijing and Shanghai, which is in turn leading to fast-rising property prices” or that Thomson Reuters TRI +1.1% could ink the sentence: “China needs more housing.” The reality of eyes and ears and common sense is quite different.

Over the last two years of traveling constantly in China, I can say that I have not seen a single city, town, or hamlet without massive empty housing stock. A colleague, on two trips crossing about 1,500 kilometers overland, said that he was not out of sight of empty buildings even once. Up by the Siberian border, the town of Manzhouli has decided to become a tourist resort and built thousands of empty “villa” developments. In the southern mountains of Yunnan, a colleague took video footage of 15 kilometers unbroken of empty highrises. The ghost developments stretch along Beijing’s southern Fourth Ring and through Shanghai’s Pudong and Xuhui. The East District Zhengzhou looks like a post-apocalyptic landscape. The new districts of Harbin could earn some revenue as sets for a remake of I Am Legend.

When I have been able to collect a count of all housing now available for sale, not counting projects already sold but not occupied, cities seem to average out at about 25 square meters of new housing per individual in the city, or one new dwelling for each four people. Yinchuan in Ningxia has around 200,000 units on the market, with a population of 800,000 in the city proper and 1.2 mln in the extended city. As a comparison, the United States sells about 650,000 new homes per year. The small city of Tieling in Liaoning Province has a reported 10 mln square meters of available space for a population of 400,000. Kunming, Xian, Chongqing, Hefei, Hangzhou, Haikou, Urumqi, Changchun: there is no city in the country without stretches of terrifyingly empty towers. [Source]

Stevenson-Yang blames local governments for accumulating wealth at the expense of the people’s savings, and predicts that “anyone visiting China five years from now will be lucky to find prices at 60% of the current values.”