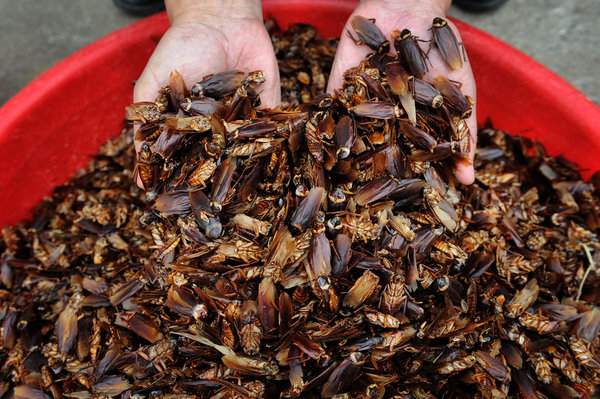 Following a million-strong breakout from a Jiangsu cockroach farm in August, The Los Angeles Times’ Barbara Demick reports that farms producing dried cockroaches for pharmaceutical and cosmetic companies are on the rise in China.

The start-up costs are minimal — Wang bought only eggs, a run-down abandoned chicken coop and the roofing tile. Notoriously hearty, roaches aren’t susceptible to the same diseases as farm animals. As for feeding them, cockroaches are omnivores, though they favor rotten vegetables. Wang feeds his brood with potato and pumpkin peelings discarded from nearby restaurants.

Killing them is easy too: Just scoop or vacuum them out of their nests and dunk them in a big vat of boiling water. Then they’re dried in the sun like chile peppers.

[…] At least five pharmaceutical companies are using cockroaches for traditional Chinese medicine. Research is underway in China (and South Korea) on the use of pulverized cockroaches for treating baldness, AIDS and cancer and as a vitamin supplement. South Korea’s Jeonnam Province Agricultural Research Institute and China’s Dali University College of Pharmacy have published papers on the anti-carcinogenic properties of the cockroach. [Source]