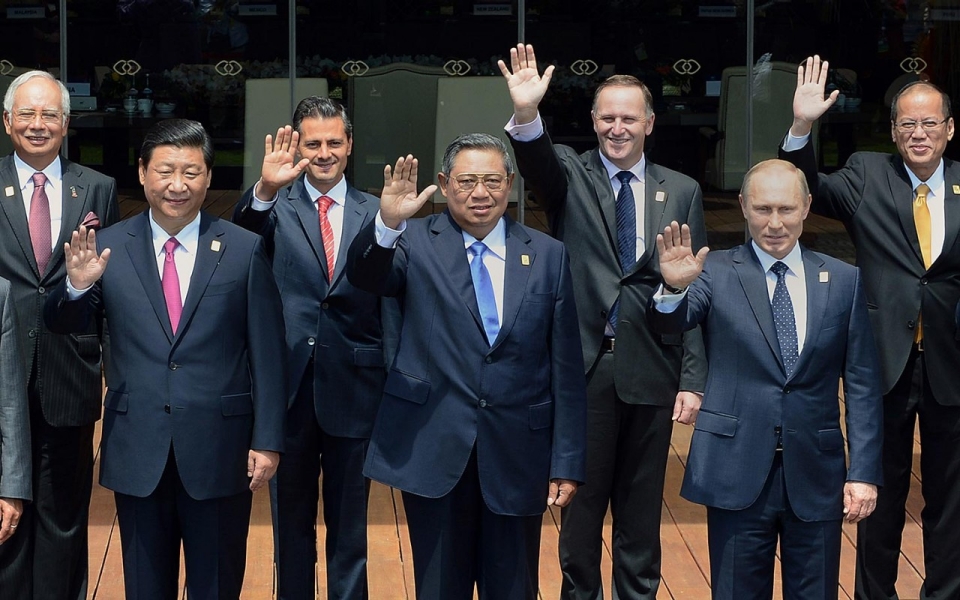 President Obama has cancelled his trip to Southeast Asia in order to deal with the ongoing government shutdown in Washington. Secretary of State John Kerry is attending the APEC summit in Bali, Indonesia in the president’s place. From the New York Times:

Mr. Xi, the keynote speaker, delivered a long, tightly scripted speech that made no reference to Mr. Obama and concentrated on the theme of Chinese economic overhaul at home, and the need for China to have the Asia-Pacific region as a partner abroad.

The absence of Mr. Obama, who canceled to try to resolve the government shutdown in Washington, was repeatedly noted at the conference, held in this enclave of international resorts on the Indonesian island of Bali. But Mr. Kerry, for his part, made light of his role as the stand-in.

“In 2004, obviously, I worked very, very hard to replace a president,” Mr. Kerry told his audience, referring to his unsuccessful campaign against President George W. Bush. “This is not what I had in mind.” [Source]

Obama’s absence from the APEC and ASEAN meetings, as well as individual diplomatic meetings with world leaders, marks a missed opportunity for the U.S. to assert its agenda in Asia and allows China to dominate the meetings. From Al Jazeera:

Some Asia watchers are calling Obama’s absence at APEC a diplomatic disaster as Asian nations grapple with perennial territorial disputes with Beijing that have threated to break out into armed conflict in recent years, particularly in the South China Sea along heavily navigated shipping routes China shares with Southeast Asian nations. The area is thought to contain large deposits of oil and gas.

[…] Obama will also miss the annual Association of Southeast Asian Nations summit in Brunei on Wednesday, as well as diplomatic visits to Malaysia and the Philippines.

Analysts say the two summits are missed opportunities for Obama, who was expected to push for the creation of the Trans-Pacific Partnership (TPP), a trading bloc that would be led by the U.S. and would exclude China. With the TPP, the U.S. aims to better economically integrate member countries through liberalized trade agreements.

Obama had set a goal of finishing negotiations on the TPP by the end of this year, and in skipping his Asia trip, he was unable to personally push negotiations forward. [Source]

The official Chinese media has taken the opportunity to praise Xi Jinping’s appearance at the meetings while criticizing Obama’s obsence. The Washington Post reports:

“Chinese President Xi Jinping has become the brightest political star on the Asian diplomatic platform. In contrast, America has lost an important chance to perform,” the Hong Kong-based Communist Party newspaper Ta Kung Pao said in an editorial. “The influence of the U.S. is questioned more and more.”

The government in Beijing has long been uneasy about Obama’s strategic goal of rebalancing U.S. foreign policy toward Asia, which many here saw as an attempt to contain China. Wen Wei Po, another Party newspaper paper based in Hong Kong, said the impasse in Washington proves that the United States no longer has the clout to back up its Asian strategy.

“Bipartisan games in the U.S. have let the world see the worst of U.S. democracy,” wrote senior commentator Huang Haizhen. “It is clear to other Asia-Pacific countries that America’s return [to Asia] strategy has become powerless.” [Source]

While Obama was also roundly criticized inside the U.S. and around the world for his failure to attend APEC meetings, some commentators downplayed the long-term impact on relations with Asian countries. Prashanth Parameswaran writes in The Diplomat:

Perceptually, Obama’s absence does compound worries about the sustainability of America’s commitment to the Asia-Pacific given its fiscal irresponsibility and political dysfunction back home. And substantively, the president has missed a golden opportunity to reiterate his commitment to Asian regionalism as well as shore up key bilateral relationships, most notably with Malaysia and the Philippines.

But while one ought not to understate the significance of Obama’s canceled Asia trip, one should not exaggerate it either as some commentators have done. The trip was canceled under a very unique set of domestic circumstances, and it does not detract from America’s deepening diplomatic engagement with Asia over the past few decades, which has only accelerated under the Obama administration. Furthermore, Washington can still recover from this setback if it plays its cards right. [Source]

In an online forum on ChinaFile, Susan Shirk, former Deputy Assistant Secretary of State under President Clinton, points out that diplomacy is not a zero-sum game and that “winners” and “losers” in the current situation should not be judged so simply:

The Obama administration came into office determined to increase American involvement in Asia in all dimensions—economically, diplomatically, and militarily—in order to avoid marginalizing ourselves from the most dynamic region of the world and to reassure our friends and allies that they could count on us. The diplomatic effort involved participating in regional multilateral institutions as well as nurturing bilateral ties. It tried to span the distance by appointing the first U.S. ambassador to ASEAN who was resident in Jakarta. The Asia initiative—the so-called pivot—set the bar very high in terms of frequency of visits by senior officials. Secretary of State Hillary Clinton made her first overseas trip to Asia and returned there very frequently over her tenure. The President and other senior officials also knocked themselves out traveling to Asia. The administration made a point of promising that it would always show up for important Asian regional meetings. It raised unrealistic expectations about how often Asians would see our senior officials. Now that the President has had to cancel his participation in the APEC leaders meeting and the East Asian Summit to remain at the helm in D.C. because of the government shutdown and looming possibility of a default, it is not surprising that commentators are quick to condemn him for failing to live up to his promises.

It’s also unsurprising the commentators frame President Obama’s absence as a big win for China. Viewing international relations as a contest in which there is one winner and one loser is a classic misperception shared by many Americans and Chinese alike.

On a similar note, in Foreign Policy Michael Auslin lists five reasons why he believes the significance of Obama’s cancellation is being overblown:

Let’s not overreact. U.S. budget cuts and policy drift may call into question the six-decade role of the United States in the Asia-Pacific — missing these events will not. Yes, it would have been better for Obama to join his fellow Asian leaders for several days of schmoozing. But Secretary of State John Kerry will travel to those four countries instead of Obama; ongoing negotiations and dialogues on security and economics will continue. When the shutdown ends, and the government returns to business as usual, Obama’s cancellation will be quickly forgotten. [Source]

For all we know, Obama’s absence will eventually be forgotten, like Bill Clinton’s no-show at the APEC leaders’ meeting and the performance of his vice president, Al Gore, in Kuala Lumpur 15 years ago. Its long-term impact may turn out to be ephemeral. Already, the organisations and countries most concerned are shrugging it off and muttering words of understanding.

In Politico, Richard Haass seems to agree that the meetings mark a turning point. In an article about the U.S. absence from APEC meetings and other consequences of the U.S. government shutdown, he writes, “One can hear the tectonic plates shifting in a part of the world destined to shape much of the trajectory of the 21st century.”

In Obama’s absence, the talks failed to produce the outcome hoped for by the U.S. The meetings failed to revive the “Doha round” of trade talks and attendees urged the negotiations to continue at talks planned for December. From the New York Times:

There was relatively little to show for the two days of meetings, dinners and lunches attended by the leaders of 21 economies in the Pacific Rim region, Taiwan and Hong Kong.

Several officials acknowledged that the gathering, held in the luxurious confines of the beach resort of Nusa Dua on the Indonesian island of Bali, produced even fewer substantive accomplishments than last year’s meeting, where the group approved an environmental goods and services accord that called for the tariffs on 54 products, like solar panels, to be reduced to 5 percent or less.

Still, the urgency of rescuing the Doha round from collapse caught the summit meeting’s attention, said Allan Bollard, executive director of the APEC Secretariat, which is based in Singapore.

“There’s a strong message they really want Doha to work, but there’s also at the same time quite a high expectation with real big problems around it and something of a sense of frustration about that,” he said. [Source]

Another major issue being discussed at the talks in Bali was the formation of the Trans-Pacific Partnership, a free trade agreement between 12 Pacific countries, not including China. The U.S. and other backers of the proposal are hoping to reach an agreement by the end of this year, but, as noted above, negotiations failed to make much progress with Obama unavailable to push his agenda. The Chinese government has not directly opposed the development of the TPP but is clearly not in favor of it either. From AFP:

But China and even some developing nations included in the TPP have expressed concern that it will lay down trade rules mainly benefiting the richest countries and most powerful firms.

“China will commit itself to building a trans-Pacific regional cooperation framework that benefits all parties,” Chinese President Xi Jinping said in a speech following Kerry’s at the APEC business forum.

Xi’s comments were interpreted in China’s state-run media on Tuesday as direct criticism of the TPP.

“The Trans-Pacific Partnership, featuring confidential talks and the highest free trade standard beyond mere lower tariffs, is widely considered a new step for the US to dominate the economy in the Asia-Pacific region,” the China Daily newspaper said in a front-page report on Xi’s speech. [Source]

For more on the TPP, read today’s State Department background briefing. Meanwhile, Quartz outlines the areas in which Xi Jinping has made progress on his Southeast Asian trip.