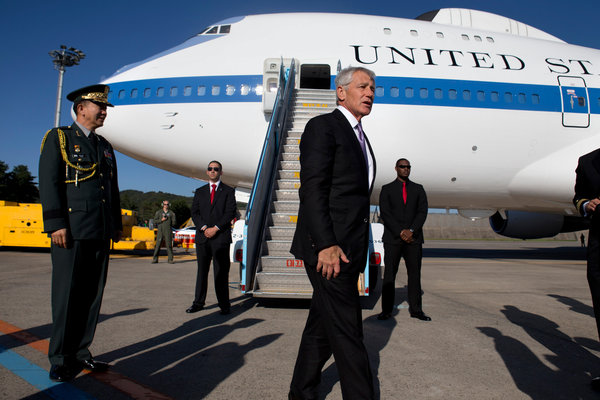 Amid internal uncertainty, political hangups at home, and other foreign policy priorities that seem to contradict Washington’s previously declared “Pacific century,” U.S. Defense Secretary Chuck Hagel is in Asia to emphasize a continuing U.S. “pivot” towards the Asia Pacific—a diplomatic and military strategy that has few fans in Beijing:

[…]Defense Secretary Chuck Hagel is forging ahead with a military agenda that reflects the Obama administration’s rising security and economic interests in the region and his own passions for Asia. After only seven months in the job, Mr. Hagel is on his third trip as defense secretary to the region this week, including four days in South Korea — the longest stay by an American defense secretary in a generation — and a stop in Japan.

The Asian rebalance is a priority, Mr. Hagel said at a news conference Wednesday here with the South Korean defense minister, Kim Kwan-jin. “You always adjust your resources to match your priorities.” [Source]

A report from Global Research notes that, while the budget standoff has led Obama to cancel stops on a planned tour of Southeast Asia, the shutdown in Washington has potential to shake faith in the U.S. throughout the Asia Pacific:

The shutdown has intensified questions about the long-term ability of the US to exercise military hegemony in Asia. Already, rising popular opposition to war inside the United States, together with Russian and Iranian threats to intervene, has led to a pause in the US-led drive to war with Syria.

Numerous right-wing regimes across the Asia-Pacific have developed highly aggressive policies, often with US encouragement, directed against China or North Korea—a state under Chinese protection. They now form a constituency demanding increased US imperialist penetration of the Asia-Pacific, in order to counterbalance the threat of Chinese retaliation for their own provocative policies.

[…]Former Defense Secretary Leon Panetta said: “I can’t imagine the president going abroad with a government that’s shut down.” He denounced Congressional Republicans, adding: “It’s a political game that’s doing damage to national security. The biggest threat to our national security right now is our failure to govern, [as other nations] will view that as a weakness.”

Charles Kupchan, a senior fellow at the US Council on Foreign Relations, said: “It’s particularly important in East Asia, where countries are uncertain about the long-term geopolitical trends and are trying to decide whether to tilt towards the United States or towards China. And as a consequence it’s an important time for Obama to show that Washington has its lights on.” [Source]