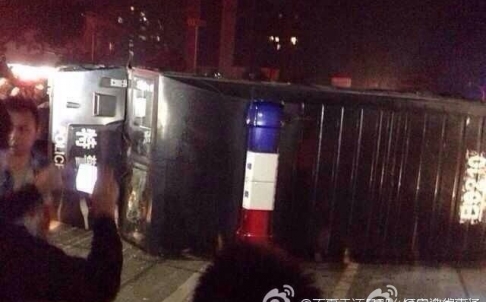 Yuyao typhoon victims in Zhejiang Province lashed out violently against police and a state TV crew last Friday night for allegedly misrepresenting the disaster’s impact on their community.  The SCMP’s Amy Li reports:

Online accounts say residents were infuriated after a journalist said to the camera that, “The flood in Yuyao is gone, and the people have gone back to their normal lives.” Ningbo TV station denied having said these words in the program.

Locals also claimed that reporters shouted abusive words at them after they suggested that the crew check out families who were stranded in the flood without any electricity, food or water. Ningbo TV Station again denied having verbally attacked residents, and said the “journalist” who appeared in  photos  widely circulated online was a resident who had forced her way onto the van.

After locals started gathering around and blocked them from driving away, TV station workers said they had to lock the van and stay inside to protect themselves. Both the satellite van and several police cars were damaged by residents with windows smashed and bodies dented, according to photos online.[Source]

Many questioned why these police, who were quick to respond to an unrest, have been nowhere to be seen in disaster relief efforts. One netizen 狸咬灰夫斯基 commented: “The police care more than maintaining stability than helping the people with flood relief.”

Most of those who are angry at the report think that the journalist cherry-picked only the good news to please officials while ignored many more people who are still suffering from the flood. “The biggest problem is that Chinese media work for the government. The people have no voice.” One netizen 用良心造房 commented.

This isn’t the first time when Yuyao people complained about the lack of truthful reporting on the city’s worst flood in century. Earlier this week, there were questions about why China’s Big Vs, opinion leaders on China’s leading microblogging service Weibo, haven’t been helping spread words about Yuyao’s situation like they did before for other natural disaster-hit places. Many blamed the recent crackdown online rumors.[Source]