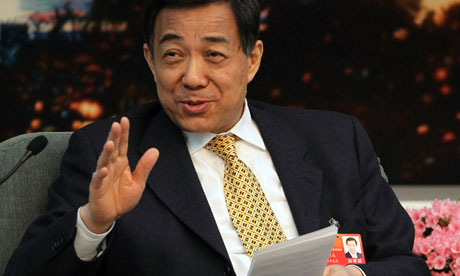 The Telegraph’s Malcolm Moore reports slow progress for victims of Bo Xilai’s rule in Chongqing, with large sums of confiscated money being returned but many remaining in prison.

Mr Bo may have been brought down, jailed for life in autumn for corruption and abuse of power, but the situation in Chongqing remains precarious, said one former government official in the city, who asked not to be named.

Building projects in several districts have been stalled, some journalists in state-owned newspapers are not being regularly paid, and even government officials have seen their salaries suspended at times, he said.

“I think they will get around to reopening the cases, but it is hard to say how long it will take,” said Mr Deng [Jiwei, a lawyer].

“First, there are so many that need to be reviewed. And then all the people who were wrongly convicted are sitting in prison; there is no urgent pressure to resolve their cases, or at least it is not as important as fixing the city’s economy,” he added.

Only three people out of the thousands jailed have so far had their sentences reversed, said Mr Deng. “They are going about it very cautiously”. [Source]

Liberals who told me last year about Bo's red terror said Chongqing is even worse now. Said gangsters were back too.

They said Bo's policies are being continued, even in his absence. Less freedom, and economy is struggling too.

They looked a bit sheepish about their hatred of Bo. "When we told you how bad he was, could we have predicted things would get worse?"

On the gangs they said the "management level" that fled Chongqing during the Smash the Black campaign has returned.

See more on the pursuit of justice in Chongqing, reflections on Bo’s rule there and accounts of torture and other abuses that took place, and the scrubbing of Bo’s legacy since his downfall, via CDT.