The Economics of Demolition: Creative Destruction 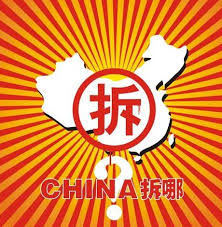 While China publishes up-to-date statistics on the new construction persistently adding to its urban skylines, official records of the many structures torn down each year are hard to come by. The Economist looks to recent research from GK Dragonomics to report on the amount of housing that disappeared between 2005 and 2010. The report outlines the “economics of demolition” in China, and explains why the rate of housing demolition can be expected to slow in years to come:

The two censuses show that a great deal of housing was built between 2005 and 2010. But a lot of housing was also unbuilt. Over five years, 1.85 billion square metres of 20th-century housing disappeared, more than 16% of the total.

Most of this demolished housing was built in the 1980s, when China’s housing was mostly constructed by state-owned enterprises and allocated to employees by their work unit. These properties, which were often cramped and dingy, will not be missed. And yet even these demolitions illustrate an important truth about China’s economy. Insofar as its restless activity is dedicated to destroying old things rather than building new ones, it is not adding to the country’s wealth, properly defined. Traditional measurements of economic growth, which make no deductions for assets lost, fail to capture this nuance: wrecking crews are always good for GDP, though their impact is destructive.

[GK Dragonomics researcher] Ms Yao thinks the frantic rate of demolition may slow in the years ahead. With so much 20th-century architecture destroyed, the country’s remaining houses are relatively young, she points out. (Over 40% of them were built since 2000.) These buildings should, therefore, last many years before they need to be pulled down. [Source]

The cycle of demolition and construction that comes with continued urbanization efforts produced an estimated two billion tons of waste nationwide in 2011. For more on construction and demolition in China, see prior CDT coverage.