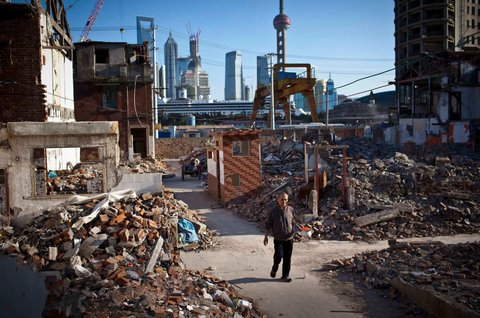 Frenzied demolition and construction produced an estimated two billion tons of waste across China in 2011, of which only 5% was recycled. From Austin Ramzy at The New York Times’ Sinosphere blog:

While the problem is often concealed, with hundreds of millions of tons of waste quietly dumped on the outskirts of China’s major cities each year, the rate of growth has made it increasingly inescapable. Now, hardly a week goes by without residents of some suburban enclave or village near a major metropolis waking to discover an illegal waste dump rising near their homes.

In January, construction waste was dumped on imperial tombs from the Ming Dynasty in the city of Xi’an. The debris caused a wall around the tomb site to collapse and half-buried a 600-year old statue of an official. In the Chaoyang district of Beijing, residents complained after a construction waste heap grew to a height of more than eight stories, raining dust on the neighborhood on windy days. A few miles away, debris from the construction of a new subway line was piled along a riverbank. The waste material climbed to more than five stories, raising fears that in case of heavy rains it would block the drainage of flood waters. [Source]