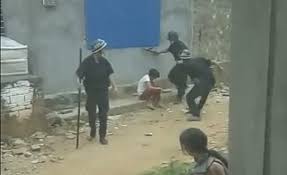 Several local and law enforcement officials in Haikou, Hainan have been punished after a video showing police brutality at a demolition site circulated widely online. At The New York Times, Austin Ramzy reports:

Seven officers who were filmed kicking and hitting residents of the village of Qionghua in Haikou, a city on the southern island province of Hainan, were also detained over the weekend, the Haikou government said.

Workers had been trying to remove people from houses that scheduled for demolition. The local government said the houses had been built illegally.

The video shows members of a local police auxiliary unit, known as a joint defense team, kicking and clubbing women and a child as they sat in a dusty street, the sound of cries filling the air.

[…] Huang Hongru, who oversees the district that encompasses Qionghua, stepped down to take the blame for the episode, and two deputy officials were dismissed, the state news agency Xinhua reported on Monday. [Source]

The officers, members of a “joint security defense team” comprised of local police and chengguan—urban management officials notorious for using excessive force and widely despised by the public—have reportedly been detained under accusations of “picking quarrels and provoking troubles,” a blanket charge that has in recent years been commonly used against activists and lawyers. At the South China Morning Post, Laura Zhou reports on the demolition and the standoff between residents and law enforcement:

The officers were involved the demolition of what the authorities deemed as illegal construction work at a village near Haikou, the [Chinanews.com] article said.

[…] Clashes broke out on Saturday with some villagers severely beaten with batons as demolition crews, including urban management officials, tried to knock down the structures.

A statement issued by the district government said some villagers tried to defend themselves by throwing stones, fireworks and petrol cans.

[…] Some law enforcement officers were injured and the disturbances seriously threatened the security of officials and other villagers, the statement added.

[…] The district government in Haikou said it was still investigating the case, according to the article. [Source]

A roundup of Chinese-language news from the Global Times reports on local authorities’ apology for the violence, relays further details on the joint law enforcement team, and notes that 11 residents were also detained amid the investigation:

While chengguan officers have long attracted scorn for their tendency to use excessive force, victims of their abuse that have countered with violence have at times won public sympathy. In 2013, Ji Zhongxing set off an explosion at the Beijing Capital International Airport after petitioning unsuccessfully for compensation for a beating that left him paralyzed; his disgruntled act of violence drew support online. Chengguan themselves have on several occasions become targets of violent counterattacks. In April 2014, five of the local law enforcement officials were injured after rumors of a fatal beating sparked riots in Zhejiang.

Amid widespread public distrust of chengguan, some cities are attempting to soften the image of these heavy-handed urban paratroopers by training all-female teams. The South China Morning Post’s Catherine Wong reports on a pilot program in the tourist city of Hangzhou:

In contrast to their sometimes scruffy male counterparts, the 21 women recruits turned out in crisp black uniforms and berets and aviator sunglasses on Saturday for their first patrol around the West Lake, the most popular tourist attraction in Hangzhou, China News Service reported.

[…] Most of the new officers are university graduates with an average age of 24, the patrol team leader Zhao Dan told CNS.

[…] “Compared with the men, the women officers can use a less confrontational approach to handling badly-behaving tourists,” patrol leader Zheng Qunfang said.

Zhao said the all-women patrols would help change the public perception of chengguan, who have been constantly criticised for aggressive and often violent enforcement against illegal street vendors. [Source]