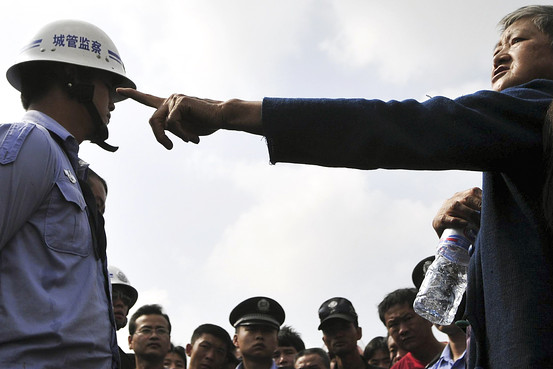 A new survey from the Chinese Academy of Social Sciences sheds light on tarnished public perceptions of officials, and reaches the unstartling conclusion that chengguan urban management officers are the country’s least-loved government workers. Tasked by local governments with maintaining public order and enforcing minor regulations on things like parking and street vendors, chengguan have attracted widespread anger for sometimes resorting to violence. In December, four were sentenced in connection with the notorious case of watermelon vendor Deng Zhengjia, who was allegedly beaten to death with his own measuring weight. Another case of reported chengguan brutality rose to prominence last year when the victim Ji Zhongxing set off an explosion at Beijing Capital International Airport after years of unsuccessfully seeking compensation for a beating that left him paralyzed. The response has sometimes been equally violent: 18 chengguan were hospitalized after an acid attack in Xiamen last year, while five in Zhejiang were badly injured during riots sparked last month by rumors that a man had been beaten to death for filming them at work. (Such an episode would not have been unprecedented.)

The state-run Global Times mounted a spirited defense of chengguan last month, describing them as victims of prejudice and scapegoating by the public, and of inadequate support by higher authorities. “Any specific cases of simple and crude law enforcement by chengguan will be over-amplified and fuel public anger,” it argued. It reported one such case the same day, in which a squad of chengguan had mistaken an official and his family for pyramid scheme salespeople in a Hefei park and, without explanation, attacked them with bamboo poles, leaving six injured and one with a broken back.

China Real Time’s Dantong Ma explored the CASS report’s other findings, some of which suggest that public resentment of officials can be a side effect of positive factors such as progressive policies and active media scrutiny.

More surprisingly, perhaps, is the kinds of officials were ranked as second-, third-, and fourth-most disliked officials: school managers, hospital managers and village heads. Though at least in theory, such officials are tasked with serving the public, the report’s author, Tang Jun, says that since such officials control scarce resources and have limited restrictions on their power, they may be easily corrupted.

[…] The report also broke down official unpopularity according to province and found that southern Guangdong’s officials received the nation’s lowest marks. According to the report’s “image crisis scale,” Beijing-based officials also ranked second-to-last among residents, accounting for 4.7% of all 2,074 cases that negatively affected the image of the government, the report said. Guangdong accounted for 8.4% of such incidents.

One of the reason why residents might view officials in a prosperous province such as Guangdong with such resentment, analysts say, is that the province has been home to a number of new policies that may have created friction as they’ve been implemented. Such policies in recent years have included loosening the country’s hukou system and implementing the country’s second-child policy. [Source]

Tang Jun, director of a crisis management research center at the Renmin University of China, said that the three regions [Guangdong, Beijing, and third-ranked Henan] have large populations with more migrant workers, which increases the difficulty of social governance.

Guangdong and Beijing are also known for their vibrant media industry, which results in high exposure of public incidents, Tang said.

Shaanxi, Jiangsu, Zhejiang, Hunan, Shandong, Hainan and Anhui provinces are ranked No.4 to 10 on the public image crisis list. [Source]