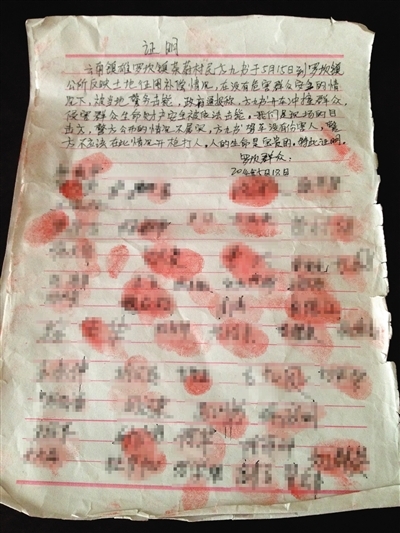 Over 100 people have signed a letter condemning the fatal shooting of a protester by a police SWAT team in rural Yunnan last week. The police say he was killed to stop him driving his truck into a crowd, but others claim that he posed no such danger. From Keira Lu Huang at South China Morning Post:

Three pedestrians were hit by the vehicle during the incident in Zhenxiong county, The Beijing News reported.

But witnesses said the truck ran out of control only after police shot the driver. Police maintain officers followed the law and handled the situation correctly. They fired four times, two of them warning shots, using 12 bullets in total, police said.

[… Fang Jiushu] jumped into the truck, and waved a 50cm-long knife when police approached him, but he put the weapon away, another witness said. “He did wave it at the police but didn’t hurt anyone,” the witness, Guan Yuchun, said. “No one was hurt.”

He started the truck, and after a few seconds, the crowd heard gunshots. “He was driving slowly, slower than people walk,” Guan said. “But I saw a plain-clothes officer fire his gun towards the sky.” [Source]

The incident follows the introduction of armed counterterrorist patrols in Beijing and other cities, and the non-fatal shooting of a suspected fuel thief in Shanghai, where beat police were rearmed last month.

Witnesses captured photographs of the Zhenxiong shooting—two are posted at SCMP—but these do not appear to have resolved the dispute over what happened. The use of cameras to capture confrontations between officers and the public has been a contentious issue this year. One Jiangsu chengguan urban management official reportedly armed himself with a Google Glass headset to surreptitiously record incidents and disprove any false claims of abuse. Attempts to achieve this with a handheld camera had angered those being filmed, he said. Some of his counterparts in Zhejiang apparently knew the feeling, sparking riots by beating a man who refused to stop recording their encounter with a street vendor using his phone.