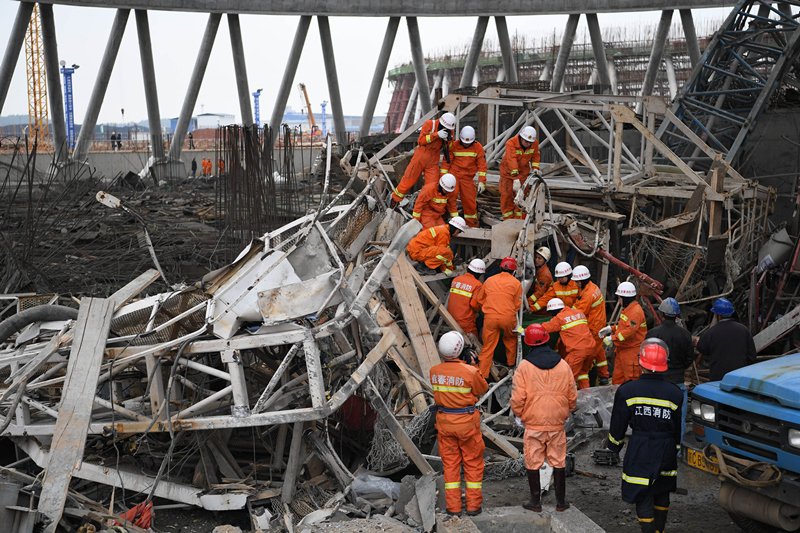 Following the collapse of a scaffolding platform that took the lives of 74 construction workers at a coal-fired power station in Fengcheng, Jiangxi last Thursday, authorities have detained nine people for their alleged involvement. Reuters’ Ben Blanchard reports:

Xinhua said the nine included the chairman of Hebei Yineng Tower Engineering, whose family name they gave as Zhang.

State media has said the company was in charge of the building project.

[…] Xinhua said the nine were suspected of “major liability” in the accident and would face criminal charges, but gave no other details other than that the probe was continuing.

State media said last week 13 people had been taken into custody in connection with the disaster. Xinhua did not say what had happened to the other four.

Deadly accidents are relatively common at industrial sites in China, where anger over lax standards is growing. Three decades of swift economic growth have been marred by incidents ranging from mining disasters to factory fires. [Source]

AFP reported on the scene in Fengcheng following the collapse of the 230 foot platform, and on public calls for punishment amid the social media outcry as the confirmed death toll rose to 74 on Friday:

Pictures of the scene in Fengcheng showed a grey mass of concrete slabs, steel girders and twisted metal splayed in a heap on the ground inside a large round structure.

Hard-hatted rescue workers in neon jumpsuits carried bodies out from the site on stretchers wrapped in orange sheeting.

[…] Commenters on Chinese social media condemned the latest accident in a country with a dire industrial safety record, demanding that the cause be identified and those responsible punished.

“This is too cruel, devastating 74 families completely with a man-made disaster,” said one poster on China‘s Twitter-like Weibo. “90 percent of them are the pillars of their family.”

Another added: “What it revealed is the severe indifference and disrespect to every worker’s dignity and life. Look at these victims and the managers who were in charge of their lives — can you still sit still?” [Source]

Coverage of the deadly accident from state-affiliated English outlet Sixth Tone notes that construction is currently the most lethal industry in China, with more recorded deaths even than China’s notoriously high-risk mining industry. Their coverage also quoted an employee of the company constructing the cooling tower who confirmed that his company had been pressured to rapidly finish the job: “If you’re trying to meet a construction deadline, than you have to rush.”  At the South China Morning Post, Viola Zhou reports on last week’s deadly construction collapse in Jiangxi as yet another example of the human cost of China’s breakneck economic development, situating it into the context of other recent and deadly incidents, and quoting a labor advocate on the need for more worker representation:

The collapse is among the deadliest industrial accidents on the mainland, with the death toll one higher than the official number of fatalities from a landslide of construction waste in Shenzhen in December. An explosion at a chemical warehouse in Tianjin last summer killed at least 165 people.

Beijing has vowed repeatedly to improve workplace safety but, despite a general improvement, tens of thousands of people still die in workplace accidents every year. In all, 66,182 people died in 281,576 workplace accidents last year, an average of 181 deaths a day, according to Xinhua.

Fang Dongping, director of the Tsinghua-Gammon Construction Safety Research Centre, said Beijing’s safety rules were strict on paper but were often neglected on the ground, where speed was valued above quality. “In China, you seldom see builders who are not rushing to get projects done,” Fang said. “The faster companies promise to complete them, the more likely they are to be awarded the ­contracts.”

[…] Keegan Elmer, from Hong Kong labour rights group China Labour Bulletin, said Beijing’s “good-looking safety laws on the books” could only be enforced if workers were given a voice in the daily operations of mines, factories and construction sites. [Source]

Last August, a massive explosion at a chemical warehouse in Tianjin killed over 145 people was answered by authorities with vows to improve workplace safety and better combat corruption in high-risk industries. Months later, a deadly landslide at an industrial park in Shenzhen, caused by years of negligent management of the construction site, renewed public debate on the risks of rapid development.

Despite suggestions that China is positioned to take a global leadership position on climate change, Beijing recently announced a substantial increase in coal generation targets, which critics say could lead to half a trillion dollars in unnecessary power plant construction.