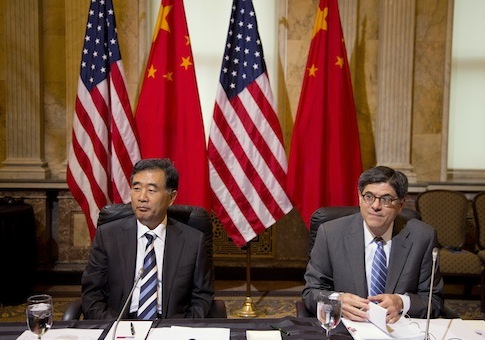 President-elect Donald Trump followed up on a key campaign talking point on Monday by announcing that he would withdraw the U.S. from negotiations over the Trans-Pacific Partnership on his first day in office, thereby negating a key part of President Obama’s legacy. The TPP, a 12-nation trade pact that did not include China, is “meaningless without the United States,” according to Japanese Prime Minister Shinzo Abe, and its future is now in doubt. The decline of the TPP has given momentum to China’s plans for an alternate trade arrangement with its Asian neighbors, the Regional Comprehensive Economic Partnership (RCEP). In recent years, China has tried to counter the U.S.’s dominant role in defining the global order through a number of ambitious initiatives, including RCEP, as well as the One Belt, One Road project, a development plan that aims to promote economic integration across 60 countries in Asia and Europe, and the Asian Infrastructure Investment Bank, which funds infrastructure projects across the region. From CNBC:

Even though RCEP’s standards are lower than those of TPP’s, that the U.S. was unable to get things done from one administration to the next meant “China is the only game in town” for Asian countries, said Ian Bremmer, president at Eurasia Group.

China’s efforts to push trade pacts coincide with other soft power initiatives aimed at cementing the country’s economic influence, such as Xi’s global One Belt, One Road infrastructure plan and the Beijing-led Asian Infrastructure Investment Bank.

This meant that Communist China was now the flag-bearer for global free trade, as Xi indicated over the weekend in Peru.

“This was not the shrinking violet ‘oh we are too poor, we don’t want to lead’ (China). This was China saying the U.S. is abdicating and we are prepared to do more in terms of international trade, in terms of infrastructure, writing checks,” said Bremmer, who was at the weekend APEC event. [Source]

As Obama met in Peru with Asian leaders for the APEC conference, partner countries responded to Trump’s election by shifting their focus to RCEP, according to a report by Gardiner Harris and Keith Bradsher in The New York Times:

Australia said on Wednesday that it wanted to push ahead with a Chinese-led trade pact that would cover Asian nations from Japan to India but exclude the United States. Peru has opened talks with Beijing to join the agreement as well. Even American business leaders are positioning themselves for the potential opportunities in Asia.

“Two-thirds of what we do there ends up in another country,” said John G. Rice, General Electric’s vice chairman for international operations. “So if they’re going to lower tariffs and trade barriers within that region, we’ll find ways to do more there.”

For the United States, such trade ties have geopolitical undertones.

Much of Asia has for decades quietly accepted American security guarantees while also running large trade surpluses with the United States, turning them into prosperous manufacturing powerhouses. But China is now the largest trading partner for most of the region, while at the same time making territorial claims against many of its neighbors. [Source]

Trump has also threatened to impose steep tariffs and other trade barriers on Chinese imports, thereby potentially launching a trade war that some believe would hurt the U.S. more than China. With the expected shift to more protectionist U.S. policy, many around the world are looking to China to fill the role of global superpower, a moment that China’s leaders are eager to capitalize on. At the APEC meetings, President Xi Jinping advocated freer global trade and international cooperation on a range of issues including climate change. Trump has claimed (and subsequently denied claiming) that the idea of climate change was “created by and for the Chinese,” prompting China’s deputy foreign minister, Liu Zhenmin, to remind him that the issue had originally been brought to global attention by his Republican predecessors. Trump has threatened to withdraw from the Paris Agreement–the first global, legally binding climate accord–then backtracked in an interview with The New York Times, saying that he would keep an open mind when reviewing the pact. If Trump does withdraw, the U.S. will be positioned to cede the role of global climate leader to China, which is “poised to assume the role of steady, reliable climate ally, in sharp contrast to Trump’s USA,” according to ChinaDialogue’s Isabel Hilton, writing in Yale’s environment360:

This time, rather than seeing the announced U.S. departure from the climate stage under a Trump administration as an excuse for others to slacken their efforts, Chinese officials made clear that this latest act of U.S. self harm would not deter China from pursuing its own interests, and that those interests lie firmly in a vision of a low-carbon future. As Liu Zhenmin said in Marrakech, any change in U.S. policy “won’t affect China’s commitment to support climate negotiations and also the implementation of the Paris Agreement.”

It is a view that is widely shared in China’s circles of experts and policymakers. While this latest turn in the U.S. administration’s climate policy might be disappointing for the global effort, China’s policy at this point has a stand-alone logic and an internal coherence that makes a change of direction highly unlikely. China plans to be the supplier of low-carbon goods to a carbon-constrained world: It already boasts the world’s biggest installed capacity of wind and solar power, and its climate policies are built in to its current five-year economic plan. The departure of the United States, far from crippling that effort, could further stimulate it: When the news of Donald Trump’s electoral college victory set cell phones beeping at a private climate change discussion in Beijing, one of China’s leading climate policy experts observed that China should now expect to assume climate leadership. [Source]

UCLA Law School’s Alex Wang writes that by giving up the leadership role on climate change, Trump would be ceding an important opportunity for the U.S. and handing it to China. As C. Custer writes for Tech in Asia, a shifting of political will and resources away from environmental issues could have a deep impact on the green tech industry in the U.S., allowing China to keep (or maintain) a lead there as well. Wang writes for LegalPlanet:

U.S. retreat from the global climate change leadership forged by President Obama not only risks slowing global progress on climate change. It also leaves on the table tremendous opportunities in green development that China is all too willing to claim for itself. China has multiple incentives to do so, all aimed at strengthening its economic and political leadership at home and abroad.

At a climate conference in Morocco last week, some participants expressed similar views that U.S withdrawal from the Paris Agreement could bolster China’s standing and leverage on a range of other global issues. From Jean Chemnick of ClimateWire:

David Sandalow, a former assistant secretary at the Department of Energy, said that if China is perceived by other countries to be the stalwart defender of climate action, it could gain the upper hand over a laggard United States on other issues, like the South China Sea or intellectual property rights.

“The United States and China agree on some issues and disagree on others,” noted Sandalow, who now heads Columbia University’s Center on Global Energy Policy. “And we have tensions on some issues where we are seeking to enlist the aid of other countries to support us. If the United States were to withdraw from the Paris Agreement and China gains credibility as a result, China would have more credibility with other countries across a whole range of issues.”

Jane Nakano, a senior fellow and China expert at the Center for Strategic and International Studies in Washington, D.C., said China would indeed gain leverage for itself and other developing countries if it remains within Paris while the United States exits. [Source]

Yet skepticism remains over whether China is prepared to fulfill a global leadership role, given persistent political, social, and economic issues at home. David Tweed and Toluse Olorunnipa at Bloomberg look at responses to the shifting dynamics in trade:

Investing in China is very difficult, and RCEP is “low level” compared with the TPP, according to Jean-Pierre Cabestan, a professor in political science at Hong Kong Baptist University.

“China is taking advantage of the statements made by Trump during the presidential campaign to occupy, if not monopolize, the high moral and political ground,” Cabestan said. “We will see on the ground which side will be fairer than the other. I continue to doubt that it will be China, because of the structure of its economy, the lack of transparency, of rule of law and the confusion between political and economic power.” [Source]

China itself seems wary of assuming the mantle of global leader at this stage. An editorial in the official Global Times expressed some of those concerns and how China has benefited from the global order as it currently stands. Simon Denyer at The Washington Post reports:

[..C]hampioning a regional trade deal is not quite the same as leading the world, and, on that score at least, China is not yet ready to take up the burden.

“China, to its credit, has always been open that at its current stage of development, it has no capability or ambition to replace the United States,” said Yanmei Xie, a China policy analyst at Gavekal Dragonomics in Beijing. “It wants the U.S. to gradually relinquish some control and gradually make room for China. But it doesn’t want the U.S. to suddenly retreat — it doesn’t want to deal with the unpredictability and potential chaos that would go with that.”

[…] More broadly, though, the Global Times argued that China is still no match for the United States, as it lacks the ability and psychological readiness to lead the world.

“If Washington withdraws from the Paris climate deal, China can stick to its commitment, yet it won’t be able to make up for the loss caused by the U.S.,” it wrote.

[…] Even in the Asia-Pacific region, China “chafes” against U.S. dominance, Xie said, “but a lot of foreign-policy experts privately admit that China has benefited from peace and stability under the current order.” [Source]