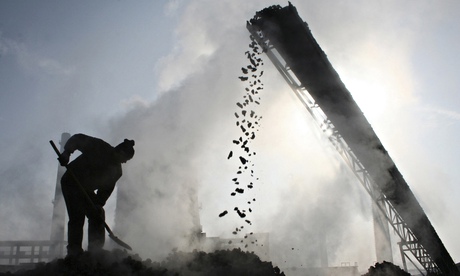 In response to mounting public anger over China’s infamous urban air pollution, authorities declared “war on pollution” in early 2014. Later that year, Xi Jinping signed an informal agreement with American counterpart Barack Obama pledging to mutually cap emissions by 2030, and last year submitted a formal pledge on carbon reduction to the UN. According to a new five-year plan released by the National Energy Administration, China plans to raise its coal power capacity nearly 20% by 2020 despite the emissions pledges. At The Wall Street Journal, Brian Spegele reports on the projections, noting disappointment from environmental activists:

In a new five-year plan for electricity released Monday, the National Energy Administration said it would raise coal-fired power capacity from around 900 gigawatts last year to as high as 1,100 gigawatts by 2020. The roughly 200-gigawatt increase alone is more than the total power capacity of Canada.

By comparison, the agency said it would increase non-fossil fuel sources from about 12% to 15% of the country’s energy mix over the same period. Coal would still make up about 55% of the electricity mix by 2020, down from around two-thirds in recent years.

“This is indeed a disappointing target,” said Lauri Myllyvirta, a campaigner at the environmental group Greenpeace. “Given that there is already severe overcapacity and demand for coal-fired power is going down, we would have expected a cap on coal power capacity much closer to the current capacity level.”

[…] Officials from the NEA defended the target in a press conference with Chinese journalists Monday, according to a transcript posted on the administration’s website. They said that the government was committed to reducing coal’s dominance in the energy mix and that they reserved the right to slow down coal-project approvals or construction, if necessary. [Source]

Coverage from Bloomberg News reports further on the projected coal-fire capacity increase, situating it into the context of projected increases for non-fossil fuel sources and overall energy capacity:

While coal-fired plant capacity will increase, it will still remain below 1,100 gigawatts, National Energy Administration Chief Engineer Han Shui said Monday in a webcast posted on the agency’s website. Non-fossil power will increase 48 percent to about 770 gigawatts over the five-year period through 2020 as total capacity expands by 31 percent to 2,000 gigawatts.

President Xi Jinping’s government is seeking to replace coal with cleaner fuels to help cut pollution that has plagued some of China’s biggest cities including Beijing, Tianjin and Shanghai. The country has said it plans to raise natural gas consumption to 10 percent of its total energy mix by 2020 from around 6 percent now.

“Coal consumption growth over the next five years is projected to be stronger than previously expected,” Helen Lau, an analyst at Argonaut Securities Asia Ltd., said by phone. “That implies that coal production must not be reduced further, otherwise, the coal market will be in deficit.” [Source]

China is the world’s largest producer and consumer of coal. Reports last year showed that coal use in China had fallen two percent in 2014, contributing to a five percent drop in carbon emissions in early 2015. Subsequent studies showed that official coal consumption statistics for 2000-2013 were higher than reported. Reports from early this year showed a further drop in coal use last year due to emission reduction efforts and a continuing economic slowdown that has hit the coal industry.

Pakistan’s The Nation reports that the new plan also outlines a increase in nuclear power capacity by 2020:

China will have 58 million kilowatts of installed nuclear power by 2020 as it expands its clean energy network and pursues green growth, the country’s energy regulator announced.

China is expected to require about 6.8 trillion to 7.2 trillion kw of power by 2020, with per capita power consumption of about 5,000 kw, close to the level of medium-developed countries.

Non-fossil fuel will play a bigger role as the government aims to lift its share in total energy consumption to about 15 percent by the end of 2020. [Source]

China is now aiming for 110 gigawatts of solar power by 2020, a 27 percent reduction from an earlier target, according to a webcast posted on the website of the National Energy Administration that cited the agency’s chief engineer, Han Shui. The nation reduced its goal for wind power by 16 percent to 210 gigawatts.

While China has poured billions of dollars into clean energy in recent years, the ability to deliver the newly-generated electricity from where it’s produced to where it’s needed has lagged. The mismatch has left solar and wind capacity sitting idle in some parts of the country, hurting companies such as China Longyuan Power Group Corp. and China Datang Corp. Renewable Power Co.

The Global Large Solar Energy Valuation Peers index, which counts many Chinese manufacturers among its 20 members, has slumped 42 percent this year. [Source]