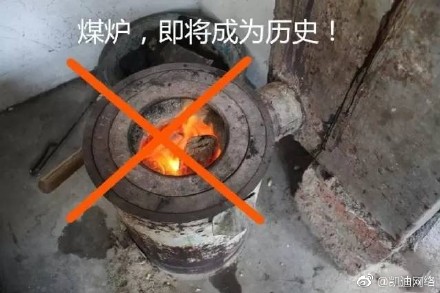 The government’s initial restriction on burning coal led to millions of families being forced to convert to cleaner fuels, such as natural gas, for heating and cooking. However, delays in setting up pipelines and severe supply shortages have left many out in the cold.

In a “double urgent” letter dated Monday, the Ministry of Environmental Protection told authorities in 28 cities to relax the coal ban at places where the conversion process had not been completed, People’s Daily reported on Thursday.

[…] “Keeping people warm in winter should be the number one principle,” the letter said, adding that the ministry would pay special attention to the issue during future inspections.

[…T]he coal ban has led to gas shortages and surging prices since the onset of winter, forcing some cities to halt supplies to factories. [Source]

At Climate Home News, Li Jing earlier reported from Zhuozhou, a small city in Hebei about 70 km south of Beijing, on how the ongoing anti-pollution drive is affecting low-income residents:

In two villages close to Zhuozhou’s high-speed railway station, on the city’s eastern edge, villagers estimate only about one third of homes have been connected with natural gas supply, while others say they’re still anxiously waiting for the gas company to install furnaces. Their old fashioned coal stoves were all demolished as the government intensified efforts to phase out coal use in rural homes.

As temperatures drop to around -6C, they say nights are “increasingly unbearable”, especially for seniors and toddlers. A street cleaner said he had to burn firewood to keep warm.

[…] “Every day, from 7pm to early next morning, there’s no heating. Sometimes the gas supply is not stable when cooking,” said a taxi driver who gave his surname as Feng.

[…] Studies have shown China’s middle class urban dwellers are increasingly willing to pay for cleaner air. Yet this winter, vulnerable groups in less developed areas are bearing the brunt of the cleanup costs. [Source]

Whats On Weibo translates social media commentary on the frigid conditions facing the many residents in northern China, including a widely-shared (and now censored) WeChat article from Brother News (新闻哥):

In the article, ‘Brother News’ reports about a small kindergarten and primary school in a village in Shanxi where the use of coal heating is no longer allowed this winter – the coal heating systems were already demolished last summer. But the building, that only has three classrooms, cannot be supplied with gas heating. The use of electric heating is also impossible, as it trips off the electricity.

Teachers have started to take their children outside during school time, as it is warmer there than inside the building when the sun is out. But as the temperatures are dropping below 1 degree celsius, the situation is getting more difficult – especially for the teachers and the older children who also live in the on-campus dorm rooms.

The ‘Brother News’ article concludes that people do want to support the transition from coal to gas that will reduce air pollution, but that it is difficult to support these measures when there are people suffering from the freezing cold: “I long for blue skies and smog-free air,” he writes: “But if it means that so many people have to sacrifice their warmth and freeze out there, I don’t want it.” [Source]

CDT Chinese has posted screenshots of the Ministry of Environmental Protection’s directive to the 28 cities, and collected several netizen responses to it on Weibo.

China is the world’s largest producer and consumer of coal. In 2015, reports showed that coal use in China had fallen two percent the year prior, contributing to a five percent drop in carbon emissions in early 2015.

In response to mounting public anger over China’s infamous urban air pollution, authorities declared “war on pollution” in early 2014. Later that year, Xi Jinping signed an informal agreement with American counterpart Barack Obama pledging to mutually cap emissions by 2030, and in 2015 submitted a formal pledge on carbon reduction to the UN.