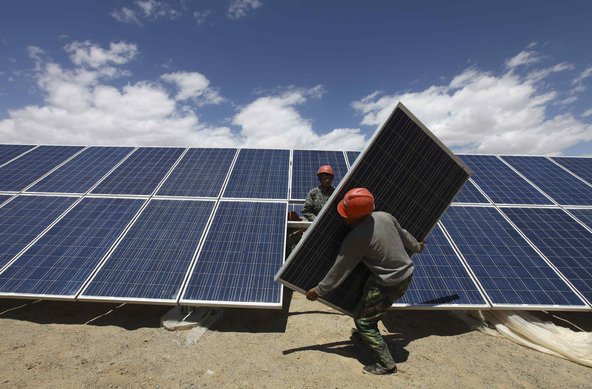 With China looking to see what options might open up in global climate leadership ahead of the inauguration of a U.S. president known to be skeptical of climate change, and as Beijing battles yet another dangerous pollution season, the National Energy Administration has reported its intent to invest over $360 billion on renewable energy sources by 2020. From Meng Meng and Josephine Mason at Reuters:

The investment will create over 13 million jobs in the sector, the National Energy Administration (NEA) said in a blueprint document that lays out its plan to develop the nation’s energy sector during the five-year 2016 to 2020 period.

The NEA said installed renewable power capacity including wind, hydro, solar and nuclear power will contribute to about half of new electricity generation by 2020.

[…] Last month, the National Development and Reform Commission (NDRC), the country’s economic planner, said in its own five-year plan, that solar power will receive 1 trillion yuan of spending, as the country seeks to boost capacity by five times. That’s equivalent to about 1,000 major solar power plants, according to experts’ estimates.

[…] Concerns about the social and economic costs of China’s air pollution have increased as the northern parts of the country, including the capital Beijing, have battled a weeks-long bout of hazardous smog. [Source]

The announcement from the NEA comes less than two months after the agency released a five-year plan with goals to increase the nation’s coal power capacity 20% by 2020 while lowering solar and wind goals, suggesting that this year’s ongoing period of toxic air pollution may have  prompted a priority adjustment.

A video report from The New York Times’ Needi Upadhye describes how public anger over smog and new opportunities in the renewable energy market are together prompting Beijing to move away from coal:

Elsewhere at The New York Times, Michael Forsythe puts this development into the context of climate concerns following the recent election of Donald J. Trump as U.S. president, explaining how the combination of planned Chinese investments and expected climate denialism inside the upcoming Trump administration could send once-potential U.S. jobs to China:

The country’s National Energy Administration laid out a plan to dominate one of the world’s fastest-growing industries, just at a time when the United States is set to take the opposite tack as Donald J. Trump, a climate-change doubter, prepares to assume the presidency.

[..] Mr. Trump has in the past called the theory of human-cased global warming a hoax and picked a fierce opponent of President Obama’s rules to reduce carbon emissions, Scott Pruitt, the Oklahoma attorney general, to lead the Environmental Protection Agency.

The investment commitment made by the Chinese, combined with Mr. Trump’s moves, means jobs that would have been created in the United States may instead go to Chinese workers. [Source]

At The Guardian, Michael Slezak reports that as China prepares to ramp up its domestic investment on renewables, it is also increasing foreign investments into renewable energy technology, setting itself up to dominate the global industry:

A report by the Institute for Energy Economics and Financial Analysis (Ieefa) found China’s dominance in renewables is rapidly spreading overseas, with the country accelerating its foreign investment in renewable energy and supporting technologies.

Analysing Chinese foreign investments over US$1bn, Ieefa found 13 in 2016, worth a combined $32bn. That represented a 60% jump over similar investments in 2015.

China was already widely recognised as the largest investor in domestic renewable energy, investing $102bn in 2015, according to Bloomberg New Energy Finance – more than twice that invested domestically by the US and about five times that of the UK.

[…] Tim Buckley, director of Ieefa and author of the report, said the election of Donald Trump in the US and lack of supportive policy in Australia left those countries at risk of missing a huge opportunity. [Source]