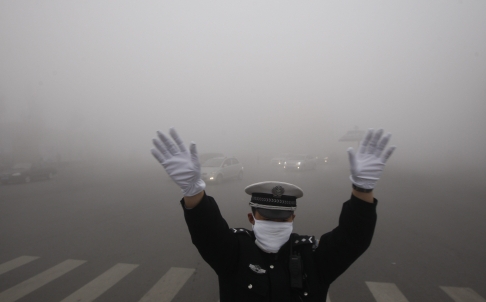 For the first time in 2016, Beijing authorities have issued a five-day “red alert” for air pollution, the highest of a four-tiered, color-graded warning system. This comes almost exactly one year after the capital issued a red alert for the first time amid U.N. climate talks in Paris. At Reuters, Christian Shepherd reports:

[…] Smog expected this week will stem from air pollution accumulated in Beijing and its environs, such as the nearby city of Tianjin and the northern provinces of Hebei, Shandong and Henan, the bureau said, citing environment monitoring forecasts.

[…] Schools freed from an earlier requirement to close en masse are being given the authority to ‘flexibly’ cancel classes, on the basis of their needs and those of students’ parents.

[…] After temporary school closures and construction halts brought by last year’s smog alert, the city government has tweaked its system. In February it linked the threshold for red alerts to a higher average of the daily air quality index (AQI).

Red alerts are now issued when the AQI, a measure of pollutants in the air, is forecast to break 200 for more than four days in succession, surpass 300 for more than two days or overshoot 500 for at least 24 hours. [Source]

More on the alert system, the provisions that go into effect under a red alert, and information from China’s Ministry of Environmental Protection on worsening air quality averages nationwide, from the South China Morning Post’s Li Jing:

Environmental authorities warned the latest period of severe smog lasting six days would be the worst experienced this year and affect more than 20 cities.

[…] The red alert is the highest warning level out of the country’s four-tier system, which triggers the limits on the use of cars and the temporary shutdown or reduced production at factories.

[…] On Wednesday, the Ministry of Environmental Protection said that the air quality in 74 mainland cities had worsened in November, compared with the same month the year before. [Source]

Authorities earlier this year raised the threshold for a “red alert,” which environmental researcher Ma Jun explained to the New York Times as an attempt to limit the “social and economic cost” that would result from multiple red alerts—inevitable prior to the adjustment—each year.

As China’s urban smog continues to worsen, The New York Times’ Didi Kirsten Tatlow reports that Beijing municipal authorities are preparing to officially list smog as a natural disaster. Tatlow notes that the plan has stirred up controversy and elicited pushback from Chinese media:

[Beijing officials] have listed [smog] on an official website of weather calamities, alongside the spring sandstorms and summer rainstorms that sweep the capital, wedged between mountains bordering the Gobi Desert and the North China Plain.

[…] There is precedent in China for ascribing manufactured disasters to nature. The famine precipitated by the 1958-61 Great Leap Forward, Mao Zedong’s campaign to collectivize agriculture and quickly expand industry, which killed tens of millions of people, is known in China as the Three Years of Natural Disasters.

[…] Pushing back against the smog-as-natural-disaster argument, the analysis in The Beijing News said: “Human activity is the root of the problem, by releasing large amounts of pollution. The root of smog is pollution. There are essential differences to natural disasters.”

“Experts say it could let polluters off the legal hook,” the newspaper added, without naming the experts, perhaps reflecting political sensitivities surrounding pollution despite the government’s increasingly open acceptance of the problem. [Source]

Coverage of the move from the official People’s Daily represents it as further proof of the city’s commitment to combat pollution. The state-run newspaper also addresses the controversy stirred by the news, notes that similar classifications have already occurred in other regions, and warns of penalties for mistakes in coverage:

The categorization of smog reflects Beijing’s resolution to contain and prevent smog. However, the decision has been controversial.

Neighboring Tianjin and Hebei province have already classified smog in their regulations, so Beijing should take the same step to better coordinate the prevention of air pollution, some reports argue. At the same time, the State Council has yet to list smog as a meteorological disaster at the national level.

The central government declared “war on pollution” in 2014 in response to rising public anger over the nation’s deadly air pollution, and authorities have since made many  policy moves to address the nation’s infamous environmental problems. Last year, the government promised to punish local officials for environmentally unfriendly decisions, and has reportedly followed through in thousands of cases. Environmental issues topped the agendas at each of the last two top political meetings in Beijing. Despite authorities recent efforts, a five-year plan outlining official goals to increase coal power capacity while scaling back stated goals on alternative energy development was released last month, much to the chagrin of environmental advocates.

While authorities once tolerated very little transparency concerning environmental data, public opinion prompted Beijing to begin requiring some cities to monitor and make air quality data public in 2012. In October of this year, five Xi’an environmental officials were detained after they were caught altering air quality data by stuffing cotton into monitoring equipment.

Beijing’s first red alert of 2016 and plan to classify smog as a weather calamity follows a massive air pollution crisis in Chengdu, Sichuan, which last week led residents to put face masks on public statues and stage sit-ins in protest. Authorities responded by sealing off the Chengdu city center with riot police, requiring stores to report customers who buy face masks in bulk, and issuing province-wide censorship directives on environmental news coverage. Cartoonists Rebel Pepper and CDT-resident Badiucao this week commented on the situation in Chengdu with political cartoons, and China Change translated an essay situating the Chengdu protests into China’s “pollution politics” by Wu Qiang.

Last week, the South China Morning Post reported on a study which showed measures to temporarily clean up air pollution ahead of political events can worsen air quality deterioration in the long-term. The strategy, prominently used during the Beijing Olympics, has since been repeated in the capital and has also been used in other Chinese cities.

See also CDT’s recent translation of a WeChat essay from the popular Buck-toothed Zhao (@龅牙赵) account urging those who see economic development as more important than environmental preservation to look back through history and reevaluate.