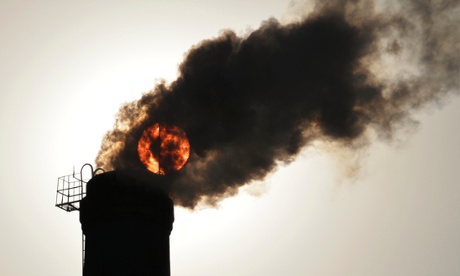 The U.N. Climate Change Conference (COP21) in Paris has been extended by one day after parties failed to reach an agreement by the initial Friday, December 11 deadline. Noting “optimism” from summit chair and French foreign minister Laurent Fabius, the BBC reports on the three major points of disagreement that have held up the issuing of a new draft of the U.N. Framework Convention on Climate Change:

As the COP21 was opening on November 29, Xi Jinping’s address from Paris stressed the need to respect differing levels of development. Reports on the Paris summit from earlier in the week noted frustration from delegates at China’s attempts to weaken proposed international standards for emissions reporting. Reuters’ David Stanway and Lesley Wroughton report on China’s role in the impasse:

Delegates said China opposed calls led by the United States and the European Union for all nations to review and update their national plans for curbing greenhouse gas emissions every five years.

President Xi Jinping has already promised that carbon dioxide emissions from China’s rapidly developing economy will start falling from around 2030, and does not want to revisit the target. Delegates said China had also reasserted demands that developed nations do far more to curb greenhouse gas emissions, mostly the result of burning coal, gas and oil.

Gao Feng, the Chinese Foreign Ministry’s special representative on climate change, played down differences between China and the United States, saying: “There are no special differences … A deal is getting closer.”

“In fact, we have been pushing all kinds of countries, whether it is the EU or others. We wish they can all be more ambitious,” he said. Many other countries were also holding their ground. [Source]

At Politico, Andrew Restuccia, Sara Stefanini, and Kalina Oroschakoff have more on arguments from developing nations, most vocally driven in Paris by Chinese and Indian delegates, noting that while qualms remain, the current negotiations mark progress from earlier climate negotiations:

[…] China and India have also resisted the push to include language in the agreement aimed at encouraging wealthier developing countries to contribute money to poorer countries to help them deal with the effects of climate change, arguing that the United States should not try to change long-standing United Nations standards. Language that would have opened the door for some developing nations to join rich countries in providing that financial assistance was removed from a draft text released by Fabius late Thursday night.

And China has also questioned new language in the agreement that calls for “greenhouse gas emissions neutrality in the second half of the century.” The draft calls on countries to “aim to reach the peaking of greenhouse house gas emissions as soon as possible,” a problem for poorer nations hoping to use fossil fuels to industrialize.

“The issue of the long term goal is one of the key issues,” said Jens Mattias Claussen, climate change advisor at Greenpeace. “China was pushing back very hard on the current text, on the long term goal, they think it’s too ambitious, at the same time you had the developing countries pushing hard on the finance text.”

To be sure, China and India have also shown willingness to compromise. Both countries have submitted domestic climate change plans that outline measures to begin tackling greenhouse gas emissions in the coming decades. And they have signaled their openness to reviewing those plans even if they are unsure about making that part of the text legally binding. [Source]

U.S. President Barack Obama reportedly called President Xi and Indian Prime Minister Modi in hopes of leveling the ground enough to reach the new December 12 deadline. Last November, an informal bilateral agreement between Obama and Xi on carbon reductions was heralded as a crucial lead-up to COP21, but also criticized by some as not going far enough. Earlier this year Xi announced additional steps China would make towards meeting the previously announced goal of a 2030 emissions peak, including the 2017 implementation of a nationwide emissions cap-and-trade system.

Amid substantial policy action from Chinese authorities in recent years, criticism that the world’s biggest carbon emitter is still not doing enough remains. As the climate talks in Paris come to a close, ChinaFile asks chinadialogue founder Isabel Hilton, Greenpeace East Asia’s Li Shuo, Tianjin University professor Zhongxiang Zhang, and Georgetown University professor Joanna Lewis to weigh in on the question “is China a leader or a laggard on climate Change?” Also see an analysis of the significant changes to Chinese rhetoric on climate change since the 2009 Copenhagen summit by Council on Foreign Relations fellow Michael A. Levi.

Meanwhile in Beijing, authorities this week raised the air pollution alert to “red,” the first time the highest-level on China’s four-tiered warning system has been enacted in the capital city. Te-Ping Chen and Brian Spegele report at the Wall Street Journal:

Traffic thinned and construction sites went silent Tuesday as the Chinese capital carried out its highest-level pollution alert for the first time, a move experts said marked official acknowledgment of public perception that previous bouts of bad air had been played down.

City officials restricted industrial production and urged schools to shut their doors among other three-day emergency measures enacted on Tuesday after the city issued what it calls a red alert over pollution levels. Beijing’s more-than-20 million area residents were told to wear face masks outside. Cars with odd-numbered license plates were ordered off the road, while 800 additional public buses and 50 extra subway trains were mustered to take up the slack.

[…] The air-quality index topped 300 by Tuesday afternoon, a level the Chinese government deems “heavily polluted.” By contrast, the air-quality index in the New York City area at the same time was 49. The U.S. Environmental Protection Agency said an index reading above 300 is “extremely rare” in the U.S. and generally occurs only during events such as forest fires.

But Beijing’s pollution as of late Tuesday still hadn’t reached the levels the city saw last week, when pollution levels went off the chart. During that five-day stretch city officials issued an orange alert, which restricts some economic activity but keeps traffic and other activities largely untouched. [Source]

Reporting on the “red alert” at The New York Times, Edward Wong describes the fine line Chinese authorities walk between acknowledging significant public concern about air pollution and controlling information related to it:

The alert was another of the touchstone moments that have occurred regularly since 2012, when the party began relaxing its tight control over information on air quality.

Since then, crucial decisions made every few months by senior Chinese officials have broadened the public’s understanding of the environmental degradation afflicting the nation, and they have given people more tools to gauge methods for protecting themselves. But those decisions have also raised questions about whether the party is up to the herculean challenge of cleaning up China’s environment.

On no other issue are President Xi Jinping and other Chinese leaders forced to walk such a fine line, between controlling information that has the potential to undermine their legitimacy and doling it out to increasingly anxious citizens who consider such disclosures essential.

And as awareness of their toxic environment grows, people are demanding fundamental solutions, not just periods of high alert that lead to inconveniences like school closings. […] [Source]

The Economist suggested that the timing of Beijing’s first “red alert” during the climate meetings was no mere coincidence:

It is no accident that the code red was issued while Chinese negotiators were taking part in global climate talks in Paris. Though the causes of climate change and air pollution are not identical they do overlap; the foulness of Beijing’s air owes a lot to the burning of fossil fuels, which also causes global warming. Tackling one problem may help mitigate the other. Over the past decade, China has done an about-face on its own response to climate change. Previously it refused to set any limit on its carbon emissions. Now it has agreed to cap them by 2030 (a target many say it will meet easily because of a long-term decline in the share of China’s economy contributed by energy-intensive manufacturing).

[…] The central government has a political imperative to clean up the capital because it regards Beijing as a showcase. It may hope that where the capital leads, other cities will follow. But the economic consequences of clearing the air will be far greater outside Beijing than within it. The capital has already moved most of its dirtiest industries beyond its boundaries. Much of the smog is produced by manufacturers in other provinces. Unlike during the shutdowns that are imposed to produce APEC blue, their factories were not affected by Beijing’s red alert. [Source]