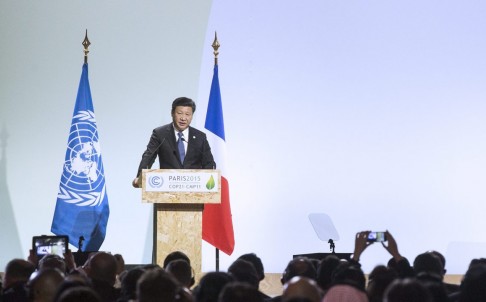 On Sunday, Chinese President Xi Jinping arrived in Paris to attend the United Nations COP21 conference on climate change. In his opening address, Xi called on world leaders to unite in their efforts to tackle climate change while also emphasizing the need to respect differences between countries’ level of development and ability to make emission cuts. Li Jing at South China Morning Post reports:

On the opening day of the United Nations Climate Change Conference in Paris, Xi said a deal for post-2020 action should be “comprehensive, balanced, ambitious and binding”. But rich nations should also honour their commitment to financial aid for developing nations.

The president said the deal had to galvanise global efforts to cut greenhouse gas emissions as well as respect the rights of developing countries to grow their economies.

“It also mirrors a new model for global governance in which each country does its fair share and reaches an all-win situation, while discarding the [old] mindset of the zero-sum game.

“The Paris conference is not the finishing line, it is a new starting point.” [Source]

Ahead of the Paris summit, Chinese climate envoy Xie Zhenhua gave an in-depth speech at the Institute of Geographic Sciences outlining China’s position on climate change in which he detailed funding and technology transfer as key issues. Click through for a complete transcript of the speech prepared by China Dialogue’s Zhang Chun.

At The New York Times, Coral Davenport cites the bilateral carbon reduction agreement reached between the United States and China last November as a crucial factor that sets the current Paris climate summit apart from those that came before:

The biggest is the breakthrough agreement between the United States and China. Last year the world’s two largest carbon polluters and historically the biggest obstacles to a deal announced plans to jointly enact emissions reduction policies.

[…] Since then, more than 170 countries, representing more than 90 percent of global carbon emissions, have put forth proposals to reduce emissions. Those plans, expected to form the core of a new agreement, represent a major change from the usual brinkmanship of climate negotiations.

Another difference between Paris and the Kyoto and Copenhagen deals: Negotiators have managed expectations. At the conferences in Japan and Denmark, world leaders promoted the expected pacts as treaties that would save the planet. No one is saying that about Paris. For one thing, a Paris deal would not take the legal form of a traditional treaty. And it would not save the planet, but only be a strong first step. [Source]

Compared to previous climate summits, there has been a dramatic shift in China’s willingness to shoulder more of the burden associated with emission reduction. In a separate report, South China Morning Post’s Li Jing looks at the underlying causes of the shift:

“China no longer sees low-carbon growth as a threat to its economic development. Rather, it’s seen as bringing new business opportunities,” Hu said.

The changes have also been made possible by an unexpected drop in China’s coal consumption – a trend that began last year amid the economic slowdown, rising use of renewable energy as well as falling production of energy-intensive products such as steel.

Governments have also come under huge public pressure to tackle air pollution in cities and to replace coal with cleaner natural gas in urban areas. [Source]

The Economist describes the progress that China has made in recent years to combat climate change and invest in green technologies:

Before 2012 no city disclosed air-quality data, recalls Ma Jun of the Institute of Public and Environmental Affairs in Beijing. Now about 400 do. Around the big cities, heavy polluters are increasingly chivvied to clean up. To an extent, the problem is simply being pushed from China’s coastal cities towards the interior. But that is progress of a kind. The coal-fired power stations that are shutting on the east coast are some of the most polluting in the world. The new ones being built in the west are some of the world’s best. They burn coal at higher temperatures and use higher pressures, making them more efficient.

China is also throwing money at nuclear power and renewables. It spent almost one dollar in every three invested in renewable energy around the world in 2014, according to Bloomberg New Energy Finance, a research firm. Last year China got about 11% of its energy from renewables, helped by an unusual quantity of rainwater to power its hydro-electric stations. The country also claims to have connected five gigawatts of solar-power capacity to the grid in the first three months of this year—almost the equivalent of all the solar panels in France. [Source]

Meanwhile, Felicia Sonmez at China Real Time reports that Beijing has been issued one of the city’s highest air pollution alerts on Sunday as heavy smog enveloped much of northern China:

Air pollution in some parts of the Chinese capital on Monday reached the maximum on the government’s official index, which tops out at 500. At 4 p.m., seventeen of 33 official monitoring stations in Beijing showed readings of 500, or what the government calls “severely polluted.”

[…]The smog, which first hit hazardous levels over the weekend, also smothered a swath of the north China plain. State media, citing the Ministry of Environmental Protection, reported that the affected area covered 530,000 square kilometers as of Sunday. That’s larger than Spain or the entire state of California. [Source]

In a 900-page study titled the “Third National Climate Change Assessment Report,” Chinese state-affiliated climate experts gave a detailed assessment of the challenges facing the country as a result of rising global temperature. Below are some of the key points summarized by Chris Buckley at The New York Times:

Although global warming sometimes conjures images of parched deserts, the consequences for rain and snowfall across China are more complicated, as they are for many other parts of the world. Warmer air absorbs more moisture that, sooner or later, is released as precipitation. The effects on precipitation across China are likely to vary widely, and scientists are still working on finer-grained models of likely change. In parts of northern, northwestern and southern China, rain and snowfall have decreased in recent decades, while in other regions, especially out west, precipitation has increased.

Over this century, the report says, China’s total precipitation could increase 2 percent to 5 percent. But increased evaporation due to higher temperatures can mean that soil and waterways retain less of that water. “Over all, climate change may further intensify the occurrence of floods and droughts,” the report says. “This will pose even more severe challenges for management of water resources.”

The Chinese government has made national food self-sufficiency a priority, fearing that reliance on foreign markets could make the country economically and politically vulnerable. So there is a great deal of research in China on the effects of global warming on agriculture, but also considerable uncertainty. Warmer weather could extend the growing season for some crops, especially in northeast China. But farmers will also have to cope with increased pests, less reliable rain and irrigation, and hotter summers. [Source]

Read more about climate issues in China, including coal consumption in the country and its leaders’ continuing efforts to combat climate change.