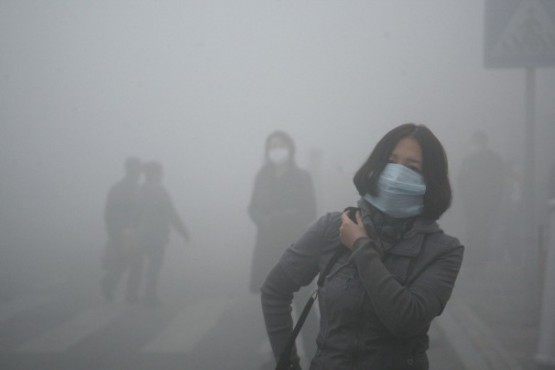 In Nanjing, the capital of Jiangsu Province, the sun was the color of “salted egg yolk” on Wednesday as the government raised the “red alert” for poor air quality for the first time, state-run news media reported.

The city saw levels of PM2.5, or particulate matter with a diameter of 2.5 micrometers, reach a reading of 354 on Wednesday, said Nanjing-based news portal news.longhoo.net.

Levels above 300 are considered hazardous, while the World Health Organization recommends a daily level of no more than 20.

Qingdao, a coastal city in Shandong province, was also shrouded in smog as PM2.5 levels of over 300 were recorded, said Peninsula Metropolis Daily, a Qingdao newspaper. [Source]

Air quality in China typically plummets during the winter months, as heating systems in northern China depend on coal. In October, the density of particulate matter in Harbin reportedly climbed 40 times higher than the international safety standard. Those readings even surpassed the levels from Beijing’s “Airpocalypse” in January of this year.

With visibility reduced to less than 50 meters in places, many highways in east China’s Jiangxi Province were closed on Thursday morning. A Xinhua reporter saw thousands of drivers stranded on the Changdong Highway in the provincial capital of Nanchang.

[…] In neighboring Zhejiang Province, lingering smog left the air quality in the cities of Shaoxing, Jiaxing and Jinhua at seriously polluted levels, according to the website of the provincial environment protection department.

Six vehicles rear-ended at 8:10 a.m. on Ningbo Ring Expressway, leaving one person dead and two others injured. An oil tank truck carrying 27 tonnes of oil was among the six vehicles. It overturned and caused an oil leak, which was stopped later at noon. [Source]

Shanghai, which issued an orange alert on Thursday afternoon, has seen pollution levels climb higher than at any point since its new air quality index was launched a year ago. From The New York Times’ Austin Ramzy:

By early evening Thursday, the pollution level in Shanghai was hovering at 340. At least 16 other cities in four provinces in eastern China were also reporting pollution levels over 300. In Zaozhuang, a city of nearly four million in Shandong Province, the pollution index hit 500, the maximum reading on the Chinese scale.

The pollution prompted the prominent property developer Zhang Xin to recommend on her microblog that all real estate developers install air filtration systems “to keep the smog from getting indoors.”

“Shanghai’s pollution is really bad. I’ve rarely seen it like this,” Yang Hongxu, vice president of the Shanghai-based E-house China Research and Development Institute, wrote on his Sina Weibo account Monday. “It’s not the lack of clarity, it’s that it’s really hard to breathe. In 10 years I’ve never been this sensitive to it.” [Source]