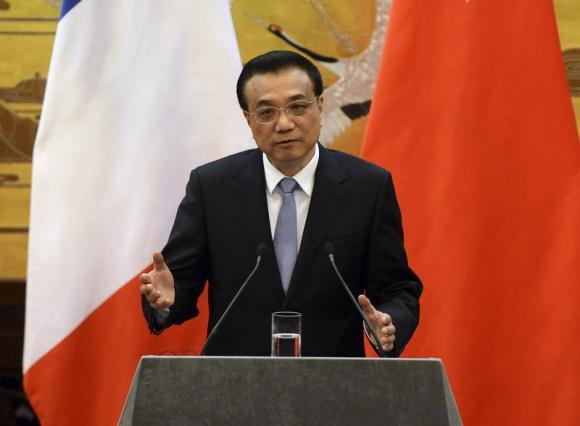 While delivering his government work report yesterday at the opening of the annual National People’s Congress, Premier Li Keqiang used militant language to describe a major policy goal for the Xi administration: cleaning up the country’s pollution. While local response plans for severe pollution have already been enacted, the announcement at the opening of the the country’s annual parliamentary session signals a central commitment to nationwide environmental protection reform amid mounting public concern about pollution. The New York Times’ Didi Kirsten Tatlow reports:

It was the last item on a list of nine “Major Tasks for 2014″: “Building China into a beautiful homeland with a sound ecological environment.”

The standout phrase: “We will declare war against pollution and fight it with the same determination we battled poverty.”

“Smog is affecting larger parts of China, and environmental pollution has become a major problem,” Mr. Li said, “which is nature’s red-light warning against the model of inefficient and blind development.”

Six million older, high-emission motor vehicles will be removed from the roads and high-quality diesel fuel will be provided nationwide, he said. He promised energy conservation measures and “a sound system of tiered pricing for household water and gas consumption” to help safeguard resources.

“Governments at all levels and the whole society should act more vigorously to protect the land our lives depend on,” Mr. Li said. [Source]

The first quote in Caixin’s collection for the opening day of the NPC belongs to Premier Li Keqiang:  “We will resolutely declare war against pollution as we declared war against poverty.” Last month, Premier Li announced the creation of $1.65 billion subsidy fund to aid in the fight against pollution. 2013 saw record levels of hazardous smog in multiple cities, and put China’s air pollution into global focus. The premier also mentioned plans to cut down particulate matter emissions. From Bloomberg:

Li’s remarks, delivered in China’s equivalent of the U.S. president’s State of the Union address, reflect government recognition of public displeasure over pollution and its impact on people’s health. The weeks before the congress saw pollution stuck at unhealthy levels in much of northern China, prompting one government adviser to say smog had become “unbearable.”

[…] Li said China will reduce emissions of PM10 and PM2.5, the small particulates that pose the greatest risk to human health, and impose a ceiling on energy consumption. A clean-water action plan will protect sources of drinking water, he said.

[…] A U.S. Embassy monitor said the level of of PM2.5 in the Chinese capital today was 13, about half the World Health Organization’s recommended limit for 24-hour exposure. [Source]

Over the past three decades, China’s environment has been progressively worsening amid rapid economic growth, and many commentators have argued that central priorities must shift from GDP to public health. While getting aggressive on pollution, Li Keqiang’s work report also stated an economic growth goal of 7.5%, making this the third consecutive year with the same target. Despite environmentalists’ warnings, Beijing seems intent on cleaner, not less, economic growth. From Ben Blanchard and David Stanway at Reuters:

Curbing pollution has become a key part of efforts to upgrade the economy, shift the focus away from heavy industry and tackle the perennial problem of overcapacity, with Li describing smog as “nature’s red-light warning against inefficient and blind development”.

“This is an acknowledgement at the highest level that there is a crisis,” said Craig Hart, expert on Chinese environmental policy and associate professor at China’s Renmin University.

“Their approach is going to have to be pro-economy. I think they will pump money into upgrading plants. This could be another green stimulus although it is not being packaged that way.” [Source]

China surpassed last year’s target with 7.6% economic growth—it’s lowest since 1999. If China’s economic growth does slow to 7.5% this year, some feel that would undermine other reform goals stated in Premier Li’s report. From Marketwatch:

While many analysts worry China’s economy could be in serious trouble in light of rising credit risks and worsening pollution, the country’s year-old leadership has just announced an ambitious goal of keeping the economic giant on a fast track at the same time as it forges ahead with far-reaching structural reforms.

At the start of China’s annual meeting of its legislature, the National People’s Congress, Premier Li Keqiang said the government would keep its economic-growth target at 7.5% in 2014, unchanged from that of 2012 and 2013. Meanwhile, the consumer inflation target was set at 3.5%.

[…E]ven the 7.5% target has struck some analysts as overly optimistic, with China’s growth seen as likely to slow as its investment-driven and export-oriented growth model undergoes structural changes. Maintaining the growth rate would have to take place as government seeks to curb shadow-banking risks, fight air pollution and improve the lot of the country’s millions of migrant workers as part of reform efforts announced at the Communist Party’s Plenum late last year.

[…]“It seems to us a mission impossible to achieve each and every task outlined in the premier’s speech without compromising on the growth target,” said analysts from Société Générale in a note on Wednesday. “In other words, in order to hit the growth target, debt risk will probably build further and/or reform progress may suffer.” [Source]

“Smog is affecting large parts of China,” Li said in his address that lasted a little over 100 minutes. “Environmental pollution has become a major problem, which is nature’s red-light warning against the model of inefficient and blind development.”

He said the battle against pollution will be waged via price reforms to boost non-fossil fuel power and cutting capacity in the steel and cement sectors, China’s largest air polluters.

Yet plans to cut steel and cement capacity comprise just a meager 2 percent to 2.5 percent of total capacity, and shutdowns may even be outstripped by new capacity underconstruction, although this will be more modern and less polluting.

And with many steel and cement factories already driven out of business by falling demand, some analysts question China’s willingness to go the extra mile on pollution. [Source]

The work report released on Wednesday by the Ministry of Finance said spending on environmental protection and energy conservation last year fell 9.7% to 180 billion yuan ($29.3 billion) compared with 2012. That amounted to only about 86% of what was budgeted for those subjects last year.

In 2012, spending on those areas exceeded its budget, and grew 23% to about 200 billion yuan. By comparison, China’s military spent about 720 billion yuan last year, according to the government.

[…] The spending drop contrasts with some of the rhetoric from Chinese leaders in their reports on Wednesday ahead of the start of the once-a-year National People’s Congress. In a separate report, China’s top economic-planning agency said it would work to meet its emission reduction targets and introduce programs where polluters pay for the pollution they cause and are accountable for environmental damage. [Source]

As Li issued the battle cry against pollution, the South China Morning Post was reporting on upcoming test runs of a cheaper, more efficient smog-fighting drone being developed by the Aviation Industry Corporation of China:

The vehicle will spray chemicals that freeze pollutants, allowing them to fall to the ground.

The tests would be led by the China Meteorological Administration and carried out later this month at airports and ports, Xinhua said.

[…] The mainland has used aircraft and fixed-wing drones to spray chemicals to disperse smog for several years, but the developers claim the latest design is 90 per cent cheaper and more efficient to operate.

The manufacturer has already carried out about 100 hours of test flights, Ta Kung Pao reported.

The chief executive of the company, Ma Yongsheng, said the drone could carry 700kg of smog-clearing chemicals that could be used over a five-kilometre radius, the newspaper reported. [Source]

Smog seems to have cleared in Beijing ahead of the annual meeting of the National People’s Congress after serious air pollution brought the municipality’s emergency response alert system to “orange” last month for the first time.