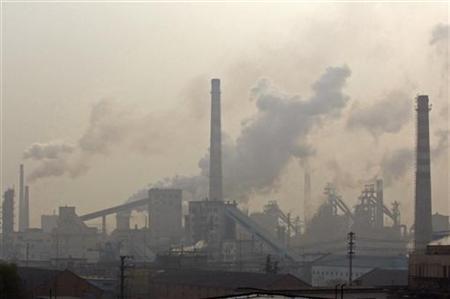 A recent round of inspection checks by China’s Ministry of Environmental Protection (MEP) has found that a number of factories that were ordered to shut down due to environmental violations have continued to operate illegally. These cases of non-compliance highlights the monitoring and enforcement challenges that China’s environmental authority faces amid ambitious plans to tackle pollution. Bibek Bhandari at Sixth Tone reports:

The Ministry of Environmental Protection (MEP) recently discovered that several factories shut down for “serious” violations of environmental standards had nevertheless resumed operations. Though inspectors sealed the facilities and seized equipment, subsequent checks found that some of the companies had disregarded the ministry’s instructions by continuing to operate, it said in a statement Tuesday.

A lime processing plant on the outskirts of Beijing was sealed during a previous check for not meeting pollution treatment standards and even had its equipment seized, but the ministry said there were “obvious signs” of continued use during its recent inspection. Some half-dozen companies in Hebei and Shandong provinces had also tampered with the inspectors’ efforts to seal off the premises and resumed unauthorized operation.

The transgressions were discovered during spot checks that the MEP teams had recently conducted in Beijing, Hebei, and Shandong. In its statement, the ministry said more than half of the businesses inspected — 285 out of 450 — were not adhering to pollution standards and operational criteria. While some companies had not conformed to industrial policy, or had started operating before their environmental impact assessment report was approved, others lacked proper pollution control facilities, according to the MEP. [Source]

Several polluters had reportedly resisted checks from inspectors, with one factory manager in Shandong locking an MEP inspection team inside his factory compound for over an hour before authorities intervened.

In a separate anti-pollution campaign in and around the Beijing area, authorities uncovered environmental violations at more than two-thirds of firms inspected. Sue-Lin Wong at Reuters reports:

China launched a campaign earlier this month aimed at “normalising compliance” in 28 cities in the Beijing-Tianjin-Hebei region, a major pollution hotspot.

Tian Weiyong, head of the monitoring department at the Ministry of Environmental Protection (MEP), said 4,077 firms had already been investigated as part of the campaign, and 2,808 firms were found to have violated environmental rules, 69 percent of the total.

China is in the fourth year of its “war on pollution”, but the Ministry of Environmental Protection (MEP) has traditionally struggled to impose its will on powerful industrial enterprises and growth-obsessed local governments.

[…] China imposed total fines of 6.63 billion yuan ($963.30 million)for environmental violations in 2016, up 56 percent compared to the previous year, the environment ministry said in a statement ahead of the Friday briefing.

It said it punished a total of 137,800 environmental violations in 2016, up 34 percent from 2015, in its efforts to boost environmental law enforcement and compliance. [Source]

Amid continuing resistance at the local level, environmental authorities are now enlisting the help of non-government organizations and the media in catching non-compliers. The call came this week after a volunteer group exposed two incidents of water pollution. From Sue-Lin Wong and David Stanway at Reuters:

The environment ministry and the provincial government of Hebei launched an investigation after a team of volunteers reported the cesspits, which had contaminated farmland in the northern province’s Dacheng county.

[…] “We are extremely open to all kinds of NGOs, the public and the media helping to provide oversight, so we can improve our environment,” Tian, head of the ministry’s monitoring unit, told a news conference to which foreign media were invited for the first time.

Reporting on environmental violations was a form of community service, he said, adding that there were 240,000 followers of the ministry’s public account for such reports on popular messaging app WeChat.

“We are particularly keen for NGOs to make the most of their unique capacity and to work on this issue from another perspective, by bringing public interest lawsuits in this area.” [Source]

China is also expanding its crackdown on emission from ships, which has been a major contributor of air pollution in the country’s port cities. The new Domestic Emission Control Area (DECA) regulations are set to expand the number of port areas requiring ships to switch to low-sulphur fuel at berth and near harbours. However, enforcement is expected to be difficult due to logistical reasons. Fung Freda and Zhu Zhixi at China Dialogue report:

Between April and November 2016 Shanghai’s enforcement agency inspected some 1,858 ships, caught 55 ships violating the rules and issued more than US$100,000 (690,000 yuan) in penalties. Two months after the regulations were phased in at four ports in Bohai Bay, two ships, including a foreign flagged ship, were caught using non-compliant fuels.

[…] The International Maritime Organization (IMO) requires ship operators to keep bunker delivery notes on board and maintain samples of fuel collected during refueling to demonstrate compliance with marine fuel regulations. But these are susceptible to fraud or forgery.

In addition, oceangoing ships – the main target of the DECA regulations – are typically equipped with multiple fuel tanks connected to the engines and or boilers. Even if there are tanks storing low-sulphur fuel on board, there is no guarantee that such fuel is being used at port.

[…] And enforcement is set to become even more challenging. By 2019, the regulations will be extended to cover all ships in the DECA waters out to 12 nautical miles. International maritime law prohibits stopping or boarding a foreign ship passing through a country’s territorial waters. So it will be extremely difficult, if not impossible, for enforcement officials to take fuel samples from a ship that travels through DECA waters but calls at a port outside the DECAs. [Source]

Meanwhile, Greenpeace reports that China’s wind and solar power sectors have continued to waste large amounts of electricity despite promises to make improvements. From Reuters:

China promised last year to improve what it called the “rhythm” of construction of power transmission lines and renewable generation to avoid “curtailment,” which occurs when there is insufficient transmission to absorb the power generated by the renewable projects.

But Greenpeace said wasted wind power still rose to 17 per cent of the total generated by wind farms last year, up from 8 per cent in 2014. The amount that failed to make it to the grid was enough to power China’s capital Beijing for the whole of 2015, it added.

Wasted wind generation in the northwestern province of Gansu was 43 per cent of the total generated last year, it said.