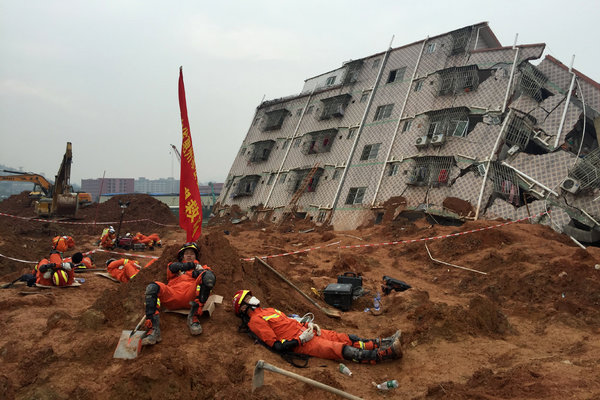 On Monday, rescue work continued at an industrial park in Shenzhen a day after a massive landslide swept over dozens of buildings, including factories and dorm rooms. The disaster was caused by years of negligent dumping of construction waste and debris, raising questions about the risks and consequences of rapid industrialization. The New York Times’ Chris Buckley and Austin Ramzy report:

Hundreds of emergency workers used bulldozers and earth movers to search a 94-acre area where some residents had for years worried that the dumping of debris so close to their homes was a crisis waiting to happen. The massive wave of earth buried or toppled 33 buildings, including apartments, worker dormitories and factories. As of late Monday, 81 people were still missing.

[…] Chinese news media have suggested that officials have allowed risks to fester, through corruption or laxity. The official response to such accidents, while often impressive in scale and speed, has done little to mute that criticism — in this case, by ignoring the danger from a growing pile of construction tailings and debris near factories and homes.

“What is troubling about this accident is that it occurred in a first-tier city, Shenzhen,” said a commentary in The Beijing News, a widely read tabloid newspaper. “It is at the forefront of Chinese citizens in its level of modernization.”

[…] China’s rapid construction growth has long created problems with the dumping of building waste and displaced dirt, often resulting in illegal, multistory piles of debris on the outskirts of cities that block waterways and bring dust and flooding. [Source]

At Quartz, Zheping Huang has more details on the company responsible for the debris build-up, noting that staff had been aware of the risks involved:

A local company called Lvwei Property Management built the dump area at the site of a stone quarry, and has managed it since 2013, according the national State Administration of Industry and Commerce, Caixin reported.

It seems the company knew that landslides were a risk, judging by its January 2015 environmental assessment report. The report, cited by Beijing News (link in Chinese), shows the site suffered from soil erosion, and that it was meant to be temporary, with a service term of 11 years. Both the entrance and exit of the dump area face the stricken industrial district, which includes housing for workers. [Source]

Shenzhen’s rapid building boom has led to a shortage of dumping sites for construction waste, Paul Carsten at Reuters reports:

More than a year ago, a government-run newspaper warned that Shenzhen would run out of space to dump waste from a building frenzy.

Besides new buildings, a network of subway lines is being built, and large volumes of earth are being excavated and dumped at waste sites.

“Shenzhen has 12 waste sites and they can only hold out until next year,” the official Shenzhen Evening Post, published by the city government, said in October last year. [Source]