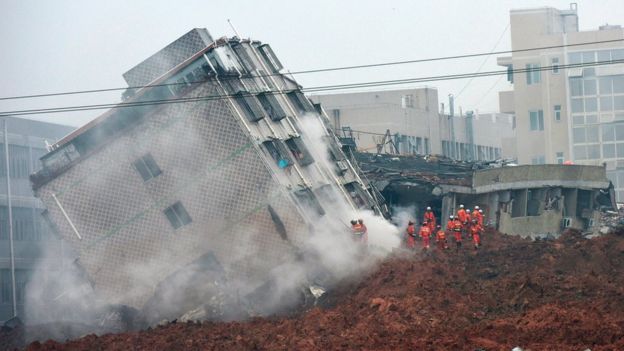 Citing Chinese state media, the BBC reports that at least 59 are missing after a landslide buried 22 buildings at the Hengtaiyu industrial park in Shenzhen, Guangdong province. The slide also triggered an explosion at a nearby section of the West-East Natural Gas Pipeline:

About 900 people were evacuated, and four were pulled from rubble with minor or no injuries, the local government said. No fatalities have been reported.

Two workers’ dormitories are among the affected buildings.

State media quoted officials as saying 36 men and 23 women were missing and that “signs of life” had been detected at three separate locations.

[…] Local media reported that the soil that came loose had been dug up in the past two years in construction work and was piled up nearby. [Source]

The BBC report includes footage of the buildings collapsing.

At The Wall Street Journal, Chun Han Wong situates the slide in Shenzhen into the context of other recent accidents that have occurred due to poor zoning regulation and rapid expansion in urban areas:

Residents told Xinhua that the landslide stemmed from an artificial hill created over the past two years by the dumping of soil excavated from nearby construction sites. Shenzhen, an industrial hub in Guangdong province, didn’t experience major rainfall in recent days, though there was light rain on Sunday morning, Xinhua said.

Rapid urban expansion coupled with lax enforcement of zoning regulations have contributed to other accidents in major cities. In the northeastern city of Tianjin an explosion at a warehouse killed 173 people in August; the government said the hazardous materials warehouse was located too close to nearby apartments in violation of regulations.

Shenzhen, which abuts Hong Kong, is one of China’s most prosperous cities, having been built largely over the past 35 years. The accident occurred in the city’s Guangming New District, a new industrial and residential zone that was set up in 2007 and is home to roughly one million people, according to the district government’s website. [Source]

Read more about the August warehouse blast that killed more than 160 in Tianjin, a blast at a chemical industry zone in Shandong that same month, a chemical plant explosion in Zhejiang in September, and  another chemical warehouse explosion that hit Tianjin in October, via CDT.