Explosion at Chemical Plant in Zhejiang 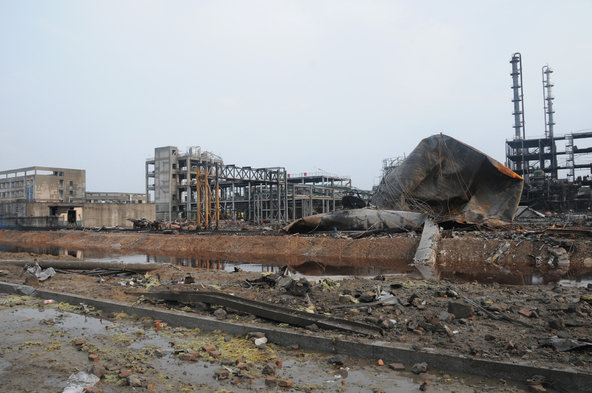 An explosion at a chemical plant in Lishui, Zhejiang on Monday has continued a string of incidents since the deadly blasts that killed over 150 in Tianjin’s port area last month. No casualties from the latest accident have yet been announced. It follows two separate explosions in Shandong, one in Zibo and another in Dongying a week later. As in the Tianjin disaster, local authorities in Dongying have come under fire for their handling of information. The New York Times’ Austin Ramzy reports:

Initially, one person was reported to have been killed in the blast at the Shandong Binyuan Chemical Company on Aug. 31. Days later, the death toll was increased to five. Then, on Saturday, that figure climbed to 13.

The announcement of the revised death toll by the Dongying city government, which administers Lijin County, said that some of the bodies were “blown to pieces” and that family members’ “mood was stable.”

The insensitivity toward the victims and the focus on stability, a priority for officials in China, prompted heated criticism online and censure from Xinhua, the state news agency.

“The coldblooded wording seems like a status report given to senior leaders. The language is ‘official speech,’ not ‘human speech,’ and classic stability-minded thinking,” the Xinhua commentary said. [Source]

The reference to relatives’ emotional stability is a routine part of official efforts to project calm following disasters or unrest. The creeping death toll reflects the typical practice of revealing casualties gradually in order to soften the news: at best, only as they are confirmed. A commentary in the state-run People’s Daily following Tianjin argued that this approach risks breeding rumor, suspicion, and impatience. It suggested adopting a “Western” model of quickly releasing “worst possible” figures and then revising them downwards if necessary.

The scale of the disaster in Tianjin has focused attention on the smaller incidents that followed, but as China Labour Bulletin reported last week, the recent series of blasts simply reflects business as usual:

China Labour Bulletin’s Work Accident Map has recorded 38 explosions so far this year, an average of about one incident every six days.

[…] In all, CLB has recorded ten explosions at chemical plants and warehouses this year. There were, in addition, six explosions in coal mines with the most serious incident being a gas explosion in Pu’an, Guizhou on 11 August which killed at least 12 miners. There were also four separate explosions at firework factories, including a major incident in Ningjin, Hebei, which killed 15 workers and injured 25 others on 12 July.

It is important however to note that explosions accounted for just 11 percent of the total 346 workplace accidents recorded by CLB so far this year. Most incidents involved some kind of structural or mechanical failure and had a small number of fatalities.

Although each incident had its own very specific causes, some common factors include a lack of maintenance and routine safety precautions, poor training and the disregard of work safety laws and regulations in the push for higher productivity and profit. [Source]

Legal scholar Stanley Lubman suggested at China Real Time that Tianjin offers a chance for decisive action against such negligence, and the corruption that often lies behind it:

Soon after the Tianjin disaster, investigations began to expose corruption and illegality behind the licensing of Ruihai International Logistics Co., which owned and operated the warehouses where the hazardous chemicals were improperly stored. This event should force the state to investigate not only the control of hazardous substances nationwide, but also food safety and environmental pollution because all three are compounded by corruption and local disregard of the law.

[…] The Tianjin disaster creates a compelling motivation – and opportunity—for the Chinese leadership to investigate enforcement of public safety laws and to begin necessary nation-wide reforms. A new anti-corruption campaign should be aimed at the ranks of state agencies involved in regulation, including local governments. The campaign could be conducted by the Procuratorate, which investigates and prosecutes offenders charged with failing to enforce laws and regulations.

Such a campaign would claim attention and support from middle- and upper-class citizens like those in Tianjin, who lived in the apartments that had their windows and doors blown out by the blast wave due to violation of existing laws. Elsewhere in China, such a campaign could encourage local officials to enforce national laws more closely despite simultaneous pressure to stimulate local growth. [Source]