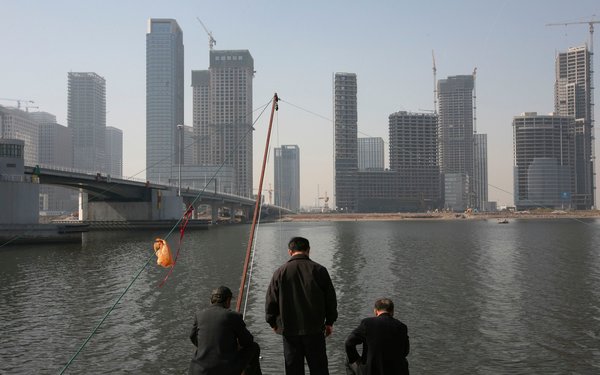 At The New York Times, Andrew Jacobs, Javier Hernandez, and Chris Buckley report on the lax oversight, official neglect, and collusion between business and corrupt officials that underlay the deadly explosions that took place earlier this month at a hazardous chemical warehouse in Tianjin’s Binhai New Area.

Now, more than two weeks after explosions at its warehouses leveled a section of that district, killing 150 people, injuring more than 700 and leaving millions here fearful of toxic fallout, Rui Hai has become a symbol of something else for many Chinese: the high cost of rapid industrialization in a closed political system rife with corruption.

In interviews with more than a dozen of Rui Hai’s former clients and associates — and unusually critical reports in China’s state-controlled news media — a picture has emerged of a company that exploited weak governance in one of the party’s showcase economic districts and used political connections to shield its operations from scrutiny.

Rui Hai began handling hazardous chemicals before it obtained a permit to do so, and it secured licenses and approvals from at least five local agencies that conducted questionable reviews of its operations. Local authorities outsourced one safety review required for a storage permit to a private contractor that Rui Hai selected and paid.

[…] “From the blasts to the botched government response, everything about this disaster is outrageous, which is why people are so furious,” said Zhang Ming, a political scientist at Renmin University in Beijing. “It was a man-made disaster that could have been prevented, and it has exposed a range of systemic problems, from the lack of regulation for handling hazardous chemicals to the collusion of business and corrupt officials.” [Source]

Twenty-three local officials and Rui Hai employees have been placed in detention or under investigation in the wake of the event, with many more detained for allegedly spreading rumors about the explosions.

On Monday, a new fire broke out at the site of the Tianjin explosions after rainfall in the region led to chemical reactions with exposed magnesium and sodium deposits left by the industrial accident. A week after the Tianjin incident, another chemical explosion in the Shandong city of Zibo underlined safety concerns. Yet another blast was reported in nearby Dongying on Monday; no cause or casualties have yet been announced.

Breaking: A blast seen and heard in a chemical industry zone in Lijin, Dongying City of Shandong around 23:25 Mon. pic.twitter.com/Yi29nJXEuX 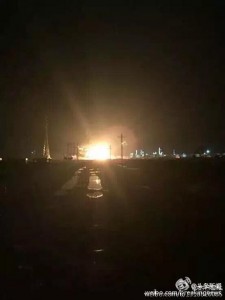 The explosions in Tianjin have prompted local governments around the country to move forward with plans to relocate and upgrade nearly 1000 chemical plants after initial resistance, Jennifer Duggan at The Guardian reports:

“We started to work with State Administration of Work Safety last year to make arrangements for the relocation and revamping of chemical plants in densely populated urban areas. Frankly, our work is not actively supported locally in the past year,” Miao was quoted by the Communist party-run People’s Daily newspaper.

According to the department’s summary, about 1,000 chemical plants need to be relocated or upgraded at a total cost of around 400bn yuan (£40.6bn).

Miao said local government and the companies involved would have to take care of part of the cost while central government would provide support. He said he wanted to “accelerate the relocation and revamping”, which would help to improve pollution and emission levels. [Source]