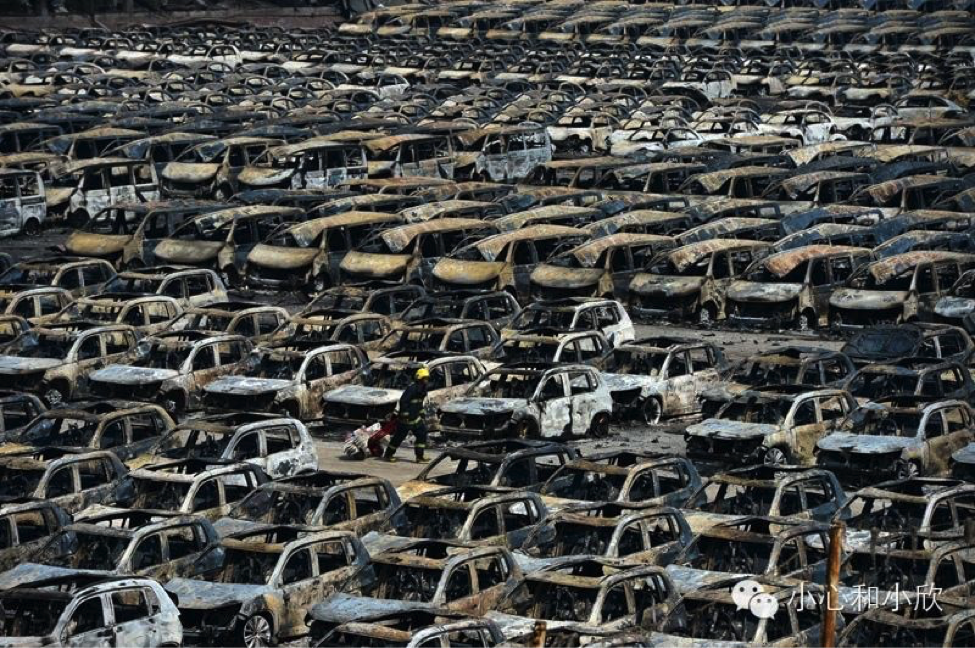 Twenty-three people have been detained or brought in for questioning over the massive explosion at a chemical warehouse in the Tianjin port two weeks ago that killed at least 145 people. According to Xinhua, 11 officials and 12 employees of Rui Hai International Logistics, which owned the warehouse, have been detained on suspicion of “dereliction of duty,” “abuse of power,” and other charges:

The officials from various government departments, including Tianjin local transportation management authorities, work safety regulatory agencies, land resources authorities, Tianjin local customs office and a state-owned port company, were probed for “dereliction of duty” and “abuse of power,” according to a statement from the Supreme People’s Procuratorate on Thursday.

More on the detentions from Javier C. Hernandez at the New York Times:

In making the announcement, prosecutors described Tianjin officials as “severely irresponsible” for failing to catch a number of violations committed by the owners of the warehouse, Rui Hai International Logistics. They noted that Tianjin officials, for instance, awarded a permit to Rui Hai, despite its “illegal operation,” according to Xinhua.

The warehouse, which routinely handled highly toxic chemicals like sodium cyanide, was allowed to operate near apartment buildings and a train station, violating Chinese regulations.

Chinese leaders have moved vigorously in recent days to quell outrage over the blasts, which rattled top leaders and raised new questions about the safety of China’s ambitious industrial zones. On Wednesday, officials announced the chief of the State Administration of Work Safety had been removed from his post, and earlier this month they detained several other employees at Rui Hai. [Source]

The Tianjin blast, which was followed by a similar but smaller-scale explosion at a chemical plant in Shandong, has raised concerns about safety and oversight at industrial facilities around the country. Reuters reports on the dismissal of Yang Dongliang, chief of the government work safety unit:

[…] A brief statement carried by Xinhua, citing the party’s organization department which is responsible for personnel decisions, said Yang had been stripped of his position as chief of the State Administration of Work Safety.

He is suspected of “serious breaches of discipline and the law”, the report said, using the usual euphemism for corruption. [Source]

Meanwhile, the central government is apparently dissatisfied with how Tianjin authorities handled the accident, prompting even the state news agency Xinhua to investigate wrongdoing by Rui Hai and local officials. From Keira Lu Huang and Nectar Gan at the South China Morning Post:

On August 19, Xinhua published an investigative report that quoted company executives who had been detained by the police as saying they had good connections with government officials. The article surprised many since Xinhua is rarely aggressive in its reporting on major accidents on the mainland, given its status as the state-run news agency.

“The top leadership of the party was dissatisfied with how the Tianjin authority handled the blasts at first, and that’s why we have state media digging into the company,” the source said.

A Tianjin port police source earlier told the Post officers had been called to help recover bodies from the disaster scene but the bodies were not being added to the official death toll at that time. [Source]

While propaganda authorities immediately limited independent media coverage of the Tianjin explosions, some domestic journalists continued to “push the envelope” with their reporting, according to China Media Project’s David Bandurski, including an eyewitness account of the aftermath by journalist He Xiaoxin, translated by CDT.

For Open Democracy, Maria Repnikova compares the blast, and the subsequent government response, to the Chernobyl nuclear disaster, which she says may have marked, “the beginning of the end of the Soviet Union”:

There are definitely parallels. Here, again, a large-scale man-made disaster has struck at a politically sensitive time. Mikhail Gorbachev was carrying out a drastic top-down reform of the Soviet system in 1986, while Xi Jinping is in the midst of an intense anti-corruption campaign, working to restructure the economy, and dealing with a stock market crisis. In addition, ‘information management’ was at the heart of ‘crisis management’ in the Soviet case and the same is true now in China. The Chinese leadership is being accused of cover-ups, sparking public mistrust of the state — a phenomenon familiar to Gorbachev.

There are, though, important differences to keep in mind, especially in the way that official communication on Tianjin has diverged from the Chernobyl model. The Soviet disaster was followed by a long official silence; the first report by a state news agency, TASS, came 65 hours after the explosion.

But such a delay was neither feasible nor intended when Tianjin’s Ruihai shipping terminal blew up. Internet-savvy Chinese citizens started spreading news and images on social networks immediately, and the international press quickly followed suit, making days of official silence unthinkable.

[…] Does the sophisticated mode of crisis management we see in Xi’s China inoculate it from anti-regime movements? Not necessarily so. With the public’s financial security already eroded, Tianjin is yet another test of the Chinese people’s willingness to continue renewing its contract with the state: an exchange of economic development and safety for political acquiescence. [Source]