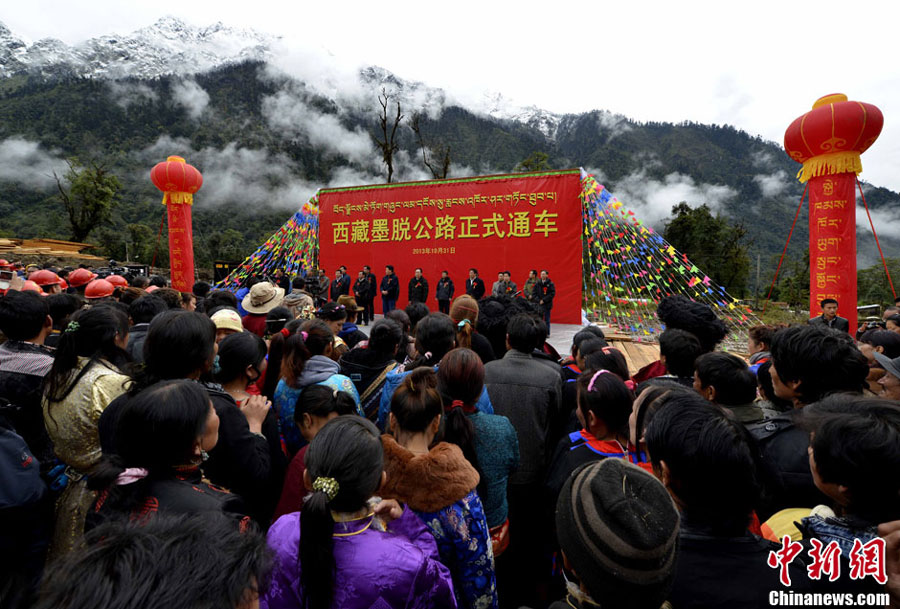 Medog, a county in Southwest China’s Tibet Autonomous Region, is the last of China’s 21-hundred counties to be connected by a highway.

The 117-kilometer highway to Zhamog Township in the north of Medog will give locals easy access to the rest of the country.

[…] Getting into and out of Medog used to be a dangerous journey.

Travellers had to climb two snow-capped mountains 4-thousand meters above sea level where landslides and collapses were frequent occurrences.

Local people called the rugged path out of Medog the “monkey road,” as only people who were light and flexible like monkeys could make their way out of the mountains. [Source]

Wu notes the destruction of an earlier road by a landslide in 1994, one day after it opened to traffic. The Hindu’s Ananth Krishnan reports that this is actually the eighth attempt in the last 50 years. Underscoring the project’s difficulty, Xinhua predicted when a major tunnel was completed in late 2010 that the route would be finished within a year. Officials tout benefits to the local community, though critics claim that China’s transport and other development programs in Tibet have more to do with cementing control than improving living standards. But the reasons for such perseverance, Krishnan suggests, also have much to do with the county’s location near the disputed Arunachal Pradesh:

State media reports have focused on the development benefits that the project would bring and have sought to play down the strategic dimensions. Local officials said the road’s opening will bring down commodity prices and widen access to healthcare.

The road will also provide access to the border county for nine months of the year. That the government was willing to spend as much as 950 million Yuan – or $ 155 million – on a 117-km highway, with ostensibly few economic returns expected, has underscored the project’s importance to State planners.

[…] The opening of the road comes at a time when there has been renewed attention on infrastructure projects in border areas in India and China.

Last week, both countries signed a Border Defence Cooperation Agreement (BDCA) during Prime Minister Manmohan Singh’s visit to Beijing, aimed at expanding confidence-building measures. The agreement calls for setting up channels of communication between military commands, increasing the number of border personnel meetings, and formalising rules such as no tailing of patrols, to built trust and avoid incidents. [Source]

The agreement was one of nine reached during the visit, but critics have argued that the deals are flawed, and pointed out other contentious issues that have yet to be resolved.

In recent years, both India and China have moved to build roads, railroads and airfields along the border. Clearly, one goal of these transportation networks is to facilitate the rapid movement of troops and artillery to the border zone. The roads can also increase crossborder trade.

[…] Meanwhile, both China and India continue to enlarge their military capacities. India has announced that a 40,000-man Mountain Strike Corps will be installed along the border. And China, as India surely knows, is not about to abandon its claim to territory that it views as part of a reunited One China. Still, the agreement gives both sides an incentive to review their now very different maps of the region and settle on a permanent border. Until that happens, the possibility of serious conflict remains very real. [Source]

See more on border tensions from the fiftieth anniversary of the 1962 Sino-Indian War last year via CDT.