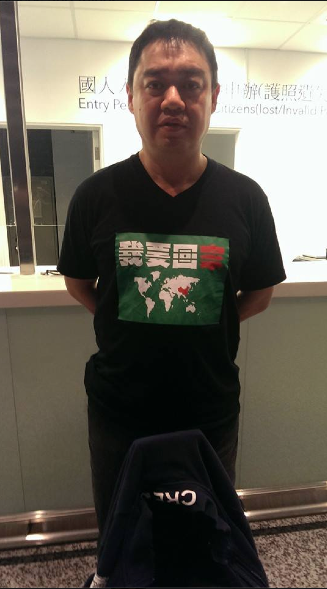 In another attempt to return to the country of his birth, exiled June 4th dissident Wu’er Kaixi’s efforts to turn himself into authorities were thwarted at the Hong Kong airport. Voice of America reports:

Wu’er Kaixi, listed by Beijing as the second-most-wanted leader of the 1989 Tiananmen Square protests, tried to surrender during a stop at the Hong Kong airport Monday.

While waiting in the airport immigration office, the dissident told VOA by phone that he misses his family after 24 years away from home.

He said, “I already told them I am a wanted Chinese criminal, and wanted to turn myself in. I haven’t seen my father and mother for over 20 years. I hope the Hong Kong government can provide assistance in helping me turn myself in, and extradite me to China.” [Source]

Wu’er was laid-over in Hong Kong on a Taipei-Bangkok flight. Authorities promptly sent Wu’er back to Taiwan, where he has lived for the past 15 years. A picture tweeted by human rights activist Diane Gatterdam shows Wu’er Kaixi back in Taiwan, wearing a t-shirt that says “I want to go home” (我要回家):

The Wall Street Journal notes that this was Wu’er’s fourth failed attempt to gain re-entry to China:

Mr. Wu’er has tried several times to attempt a re-entry to China. In 2009, he flew to Macau but was detained at the airport and deported. In 2010, he tried to enter the Chinese embassy in Tokyo and in 2012, he entered the Chinese embassy in Washington D.C., but both attempts to turn himself in were unsuccessful.

Mr. Wu’er said Monday the latest move was a “last resort” as Chinese authorities have refused to issue passports for his family members to visit him since he fled into exile shortly after the Tiananmen crackdown.

“I miss my parents and my family, and I hope to be able to be reunited with them while they are still alive ,” Mr. Wu’er said in the statement, noting that his parents are old and in ill health. [Source]

Just prior to this latest failed attempt at extradition, Wu’er posted his intentions in Chinese and English on his personal blog:

I, Wu’er Kaixi, am subject to a most-wanted warrant issued by the Chinese government in 1989 by the Beijing Public Security Bureau and promulgated as an edict nationwide by the Ministry of Public Security.

I hereby make an appeal to the Hong Kong SAR and to the world.

For more on Wu’er Kaixi and his ongoing attempts to return home for trial, see the Tumblr account in his name. Also see all prior CDT coverage of Wu’er Kaixi, Chinese dissidents, or the June 4, 1989 protests.