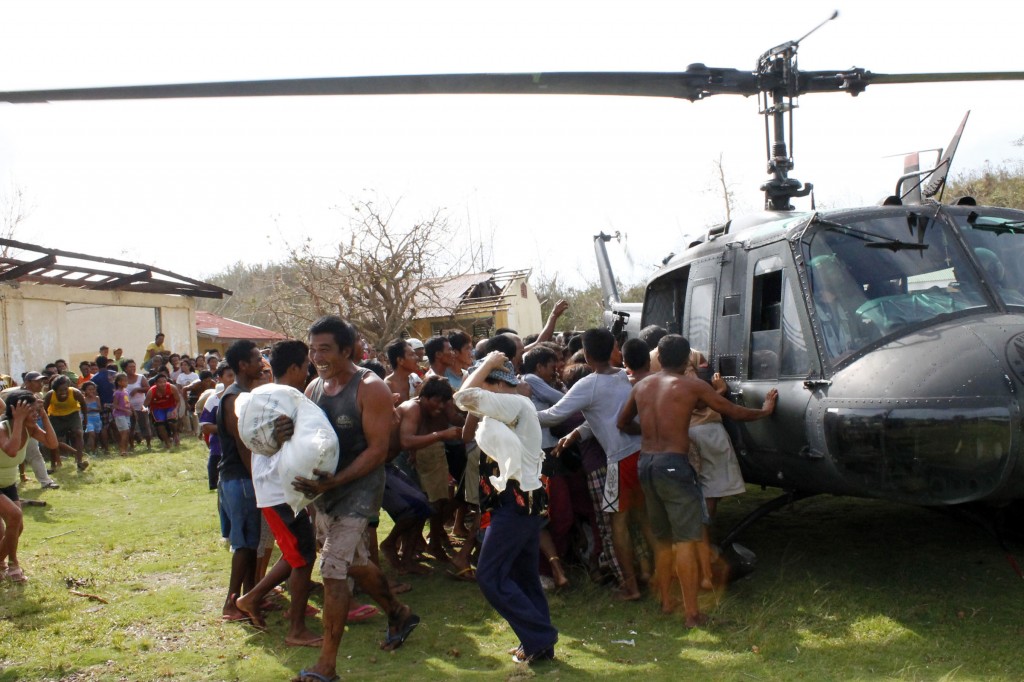 A ninefold increase in Chinese aid to the typhoon-struck Philippines has failed to quell criticism that, at $1.84 million, China’s contribution still lags well behind those of the U.S., Japan, Australia, and even companies like Ikea. Next Media Animation colorfully summed up the disapproval:

As many have noted, the Philippines has been the most assertive adversary to China’s claims in the South China Sea. While the state-owned Global Times argued that this dispute should not stand in the way of aid, others in traditional and social media disagreed, accusing the Philippines of ingratitude for what it had already received. But at Reuters, Ian Bremmer sought additional explanations for China’s apparent stinginess:

What gives — or doesn’t give, as the case may be? Why is an economy so big, a government so willing to invest abroad, and a country so eager to win favor in the region stiffing a neighbor in need? Because China is still a new enough power that it has no tradition of shelling out helpings of foreign aid — and because the Philippines is not China’s favorite country at the moment.

And despite its successes, China is actually still a poor country. Its per capita income finally topped $9,000 last year, which ranks China about 90th in the world, depending on the exact measure. Nearly 130 million of its people live on less than $1.80 per day. With a renewed sense of urgency to tackle the country’s many economic reform challenges, China has far too many pressing needs at home to be cutting big checks abroad.

At least, that’s what its less-advantaged populations might well think. In 2008, nearly 70,000 people died in China when an earthquake struck outside the central Chinese city of Chengdu. And this year, nearly 200 died when a quake rattled the country’s southwest. This is a country that struggles with its own domestic disaster relief. [Source]

The criticism has made little concession to the fact that, unlike Ikea and the Vatican, China was also in the path of the typhoon. While the death toll and devastation were far lower there, state media reported that more than 3,100,000 people were affected across Hainan, Guangdong and Guangxi, while the storm had caused up to $700 million in damage in Hainan alone.

But whatever the reasons, wrote Kristine Kwok at South China Morning Post, China has now squandered gains to its regional standing made during and after the U.S. government shutdown:

Beijing was missing out on an opportunity to regain trust and influence in the region, said Rory Medcalf, the director of the International Security Programme at the Lowy Institute in Australia. “It’s very harmful for China’s own interests and its image in the region that it’s not responding in a quicker and larger way,” he said.

China could have reinforced its claims in the South China Sea by demonstrating that it could do good there, Medcalf said. “China is actually damaging its own claims by not responding more decisively,” he said.

[…] Zheng Yongnian, an analyst of Chinese politics at the National University of Singapore, said: “China has missed an excellent opportunity to show itself as a responsible power and to generate goodwill.

The U.S. Naval War College’s James R. Holmes similarly commented at The Diplomat that “China has made itself look small and petty, like a skinflint rather than a magnanimous power worthy of regional leadership. This is self-defeating conduct of a high order.”

While aid alone would not be enough to resolve the conflicting South China Sea claims, Dan Lamothe explained at Foreign Policy that America’s robust military assistance has usefully soothed diplomatic tensions in the past, not least over its own often contentious presence.

“The United States, for all of our problems, still has a lot of good working relationships and good will in that area of the world,” said Michael Auslin, an expert on Asian politics and security issues at the American Enterprise Institute, a conservative Washington think tank. “The tragedy here is unfortunately an opportunity for us to show what we can do.”

Auslin cited the 2004 Indian Ocean tsunami as a more drastic example of how providing humanitarian assistance improved U.S. relations in Asia. In that case, the worst hit country was Indonesia, which had maintained a frosty relationship with the U.S. since it imposed sanctions on the Indonesian government in 1991 following an incident in which Indonesian soldiers opened fire on a demonstration in East Timor, killing more than 270 people. After more than 130,000 Indonesians were killed by the tsunami, however, the U.S. dispatched the aircraft carrier Abraham Lincoln and other ships to the region, providing helicopters and other assistance.

The U.S. relationship with Indonesia began to normalize afterward, most notably with the U.S. lifting an arms embargo in 2006. By last year, Indonesia’s ministers had grown enough trust in the U.S. that they said they approved of the U.S. Marines expanding operations in nearby Australia, and wanted to conduct more disaster relief training with the American forces. [Source]

Despite some recent progress, Demetri Sevastopulo wrote at The Financial Times, China still has a limited capacity for such relief actions, which in any case could easily arouse more suspicion than good will:

“China has learnt that disaster relief and humanitarian missions are good for soft power, international image, as well as honing long-range deployment skills,” says Gary Li, a senior analyst at IHS Maritime. “However, every time the Chinese military does anything at all, a whole host of ‘what are they up to’ commentary goes up in the west.”

Mr Li says “China threat” hawks almost always cast Chinese humanitarian missions as an encroachment by China in certain regions and “a wish to supplant the US as a naval hegemon”. […] [Source]

The pro-aid Global Times nevertheless urged that PLA Navy vessels be dispatched to the disaster zone, even if it half expected their aid to be rebuffed:

It’s a trend for the Chinese military to expand its rescue and humanitarian relief missions overseas. Sending Chinese warships to the Philippines at this time is well-intentioned. If Manila refuses the motion, that will only underscore its narrow mind and will be of no loss to China.

China could dispatch its hospital ship the Peace Ark, with an escort of warships, if sending its carrier the Liaoning is considered sensitive and pre-mature. The US and Japan may still likely hype China’s move, but it won’t cause any real harm to China. The global attention on the warship participation in disaster relief by the US and Japan eventually helps enhance their geopolitical influence.

The Peace Ark has participated in joint rescue exercises in Southeast Asia. Even if its appearance in the Philippines is intentionally misinterpreted, China should feel at ease. [Source]

Meanwhile, Manila has also come under fire for its handling of the disaster, as The Los Angeles Times’ Barbara Demick reports:

“In a situation like this, nothing is fast enough,” Interior Secretary Max Roxas told reporters during a visit to Tacloban, the provincial capital that was largely destroyed by the typhoon a week earlier. “The need is massive, the need is immediate, and you can’t reach everyone.”

Roxas said he had only eight working trucks for the city of 220,000, and that the local government was no longer functioning.

“The basic infrastructure of a community normally found in the world has been swept away,” he said. [Source]