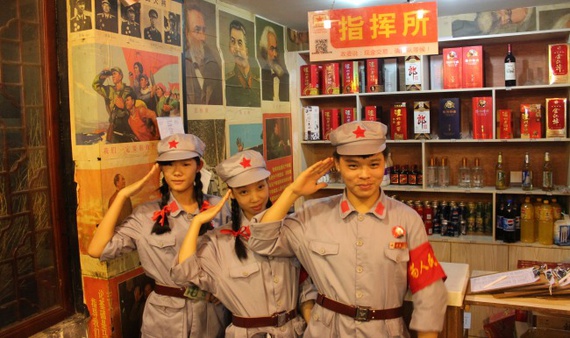 Adam Century at The Atlantic looks at Chongqing’s red restaurant phenomenon in which eateries take on Cultural Revolution-era themes to attract customers.


The walls of Old Base (laojidi), a bustling hot pot restaurant in downtown Chongqing, China looks like a Communist Hall of Fame: Karl Marx’s stern portrait, which hangs from a central pillar, faces blown-up head shots of Lin Biao and Jiang Qing, two of the masterminds behind the Cultural Revolution. Zhou Enlai and Vladimir Lenin make frequent appearances, and, of course, Mao Zedong himself fixes customers with his pensive gaze, even peering out from above the bathroom urinals. Under the watchful eyes of China’s Communist forefathers, teenage waiters donning Red Guard outfits serve up Chongqing’s distinctive, spicy hot pot.

[…] Underlying the novelty and kitsch of Old Base is that contemporary Chinese characteristic: the place turns a profit. “Serve the People,” a core Communist slogan that dates back to a 1944 Mao speech and is plastered all over the restaurant, now serves as a marketing ploy, emphasizing the waiters’ dedication to service. It’s as if today’s version of the slogan has been revised with the caveat, “Serve the People … who have disposable income.”

The nostalgia served up by Old Base is by no means an isolated phenomenon. Under the leadership of now-imprisoned Party leader Bo Xilai, Chongqing garnered international attention for its promotion and re-popularization of red songs, a genre of Communist, pro-Party folk songs that were forcibly and feverishly embraced under Mao. In October 2011, more than 100,000 city residents reportedly congregated in Chongqing’s Olympic Park to bellow the familiar tunes, marking the peak of Bo’s popularity and, for many, recalling scenes from the Cultural Revolution. [Source]

Meanwhile, in another throwback to revolutionary days, photos of Olympic hurdler Liu Xiang in a Red Army uniform at Jinggangshan have attracted online criticism and ridicule. From South China Morning Post:

The photos, which made newspaper front pages and were widely circulated on the internet, show coaches and members of the Chinese national track team on Sunday at a motivational meeting for the Rio de Janeiro Olympic games in Jinggangshan, a remote mountain area in Jiangxi province and the birth place of China’s communist revolution.

[…] “Putting athletes in Red Army uniforms and making them vow to strive hard is a bad move. Sports events ought not to be politicised,” one online user commented.

Other internet user accused the athletes of acting as propaganda tools of the Communist Party.

“If you are vowing in the name of athletic spirit, you have my support. But if you are vowing because officials told you, then you are fooling the public,” another said. [Source]