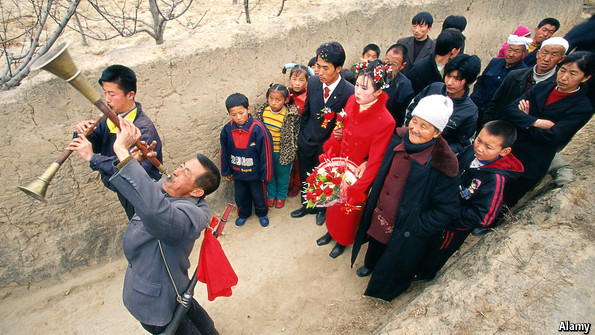 Lavish gift-giving among China’s wealthy has attracted considerable attention, particularly where, as in the case of Xu Ming and Bo Xilai, it shades into bribery. The Economist, though, examines the ruinous expense that social obligations such as wedding banquets impose on the rural poor, depriving them of material goods, driving some into debt, and even affecting pre-natal health “as poor pregnant mothers cut back on food to keep pace with gift-giving.”

IT WAS a big week for Wang Wei. On a recent Wednesday she had two weddings to attend, then on Saturday, two funerals. Each involved a banquet, and by custom she was obliged to bring cash gifts. That was no hardship a decade ago, when the going rate for four banquets was the equivalent of $5-10. And a decade before that, she would have just brought rice or corn from the family plot.

It is a hardship now. The cost of gift-giving in rural China has gone up much faster than incomes. This week Ms Wang’s outlays added up to 350 yuan, or close to $60—about a month’s income. A pleasant, open-faced woman of 41, she says it is money she could have used to buy basic appliances. A water heater would be nice, she says, so her husband, in-laws and two teenage children wouldn’t have to boil water to bathe. A fridge would be splendid. But these are extravagances. Giving gifts for big occasions is an inescapable, and increasingly onerous, obligation for hundreds of millions of China’s farmers. [Source]