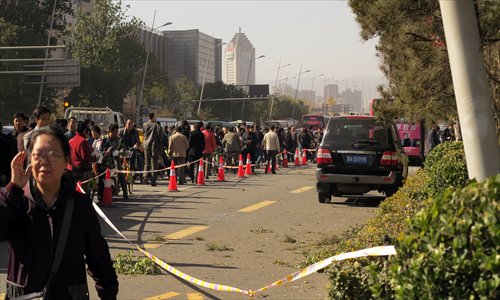 Xinhua reports that police are holding a man in connection with Wednesday’s explosions outside a Party building in Shanxi:

A 41-year-old ex-convict has been detained by police over explosions that killed one person and injured another eight in north China’s Shanxi Province earlier this week, police said on Friday.

The suspect, Feng Zhijun, is a local resident of the provincial capital of Taiyuan. He admitted to the crime after his capture at 2 a.m. on Friday, according to the Public Security Department of Shanxi.

[…] Police found self-made bombs in Feng’s residence and seized the vehicle which they believe he was using at the time of the explosions. [Source]

No motive has been announced beyond “a grudge against society,” but Asahi Shimbun reported local speculation that the culprit may be a frustrated petitioner:

A Hong Kong newspaper reported one witness as saying the first bomb exploded in front of an office that accepts petitions against the government. The Chinese government staffs such offices across the country so ordinary citizens can protest against unfair administrative practices and actions.

There have been reports that the one fatality occurred at the petition office.

Some locals speculated that someone or a group who lodged a complaint at the office resorted to violence after their petition was repeatedly ignored. [Source]

China has seen a series of violent incidents involving people who had failed to settle grievances through official channels. Ji Zhongxing set off a bomb at Beijing Capital International Airport in July after years pursuing compensation for an alleged police beating; Chen Shuizong killed 47 with an incendiary device on a Xiamen bus in June after unsuccessfully trying to claim retirement benefits; and Qian Mingqi killed himself and three others in explosions in Fuzhou in 2011 after a similarly fruitless campaign to obtain compensation for seized land. Each of these men attracted some degree of public sympathy despite their actions. South China Morning Post’s Zhang Hong sought expert comment on the violence:

“Previously, such attacks were normal criminal cases with explicit targets, but recent cases involve implicit targets – the public – at symbolic places,” said Mao Shoulong , a professor of public administration at Renming University. “Such attackers aim to attract wide attention and create an atmosphere of fear.”

Hu Xingdou , an economics professor at the Beijing Institute of Technology, said it was a sign of growing despair.

“Social problems have been accumulating over the past decades,” Hu said. Some people who have been treated unfairly want to exact revenge on society, or at least attract attention across the country or even overseas through such radical actions when they feel they have no redress through legal channels.” [Source]

David Wertime noted at Foreign Policy that, at least on weibo, the public appears divided over the Taiyuan bombings and the use of violence in general:

Online responses to the attack highlight the important debate occurring in China between those who sympathize with anti-government violence and those who don’t. The attack is big news there: The top three searches on Sina Weibo, China’s Twitter, all relate to the explosion, and an announcement about the explosion from the local police’s official Weibo account is the #2 trending post, with over 8,000 related comments. Among the hundreds of comments sampled, a surprisingly large portion expressed sympathy for the perpetrator (or perpetrators). One Weibo user wrote that under enough government pressure “common people … are all possible terrorists.” Another wrote that “people explode” when the pressure is high enough.

[…] Other users pushed back against the tide of encouragement. Many wrote that it was wrong to harm “innocent people” (although even statements of sympathy often appeared to exclude government officials.) Some confronted cheering netizens more directly. “I don’t know what is wrong with people who are praising this,” one user wrote. In a widely-shared comment, one user described a lunch-room argument with a colleague hours after the bombing. The colleague was a fenqing, or angry youth, who seemed “extremely sympathetic” to the Taiyuan killer, who the youth thought might be someone oppressed by the government. “I walked over to him,” the user wrote, “and dumped my lunch on his head.” [Source]

Wertime reported that online discussion seemed uninhibited by censors compared with that surrounding last week’s jeep crash in Tiananmen Square, which authorities describe as a terrorist attack by Uyghur separatists. Nevertheless, the State Council Information Office instructed websites “to escalate control of related information. Only material from mainstream national media may be reused. Do not comment, exaggerate, or speculate on the situation.”